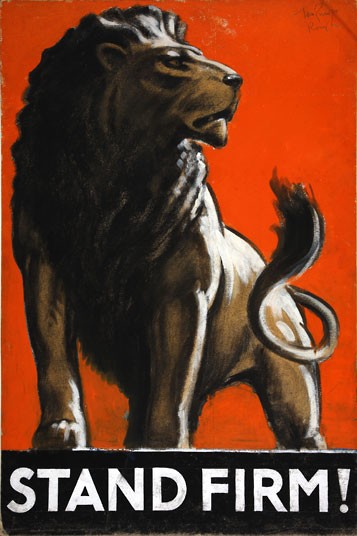 In our house, growing up, Winston Churchill occupied a place of reverence somewhere between Abraham Lincoln and the Big Guy Upstairs himself.  Statesman, author, gourmand - there was nothing that my Anglophile parents didn't revere about the Prime Minister who, in their view, forced "That Man" Franklin Roosevelt (never a popular figure chez nous) to man up and join the good fight in Europe.

I was interested, therefore, to note that today marks not only that highlight of contemporary British culture, the birthday of Sir Paul McCartney, but also the anniversary of Mr. Churchill's "Finest Hour" speech, delivered after the fall of France and just as Britain headed into the darkest days of the Great War.  Fortuitously, today also marks the posting of a trove of wartime art from the National Archive in London.  The Telegraph has a selection, and you can browse the whole gallery here.

There are some wonderful images, not least the resolute lion above.  I think I like him as much as the iconic (and now much abused) Keep Calm & Carry On.

Wartime artists were forthright about reminding their audience why they were fighting.  For the good of the fetching young lady seen here, for instance: 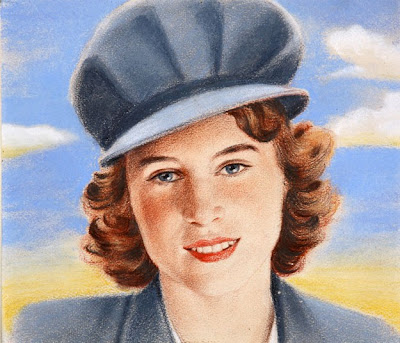 Remarkable to think she's still with us.  She trained as a mechanic, you know, and reportedly can still when called upon have a knowledgeable look under the hood.

The homefront greatly occupied people's minds, as did the role of women.  I for one would hate to have been the Nazi faced with these formidable creatures, even though they are armed only with paper, metal, and bones (and an especially stern Scottie): 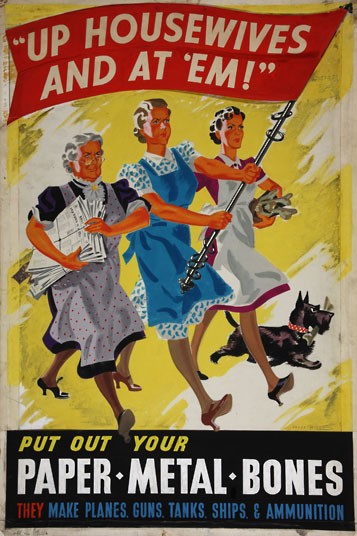 There was a role for everyone in wartime Britain - 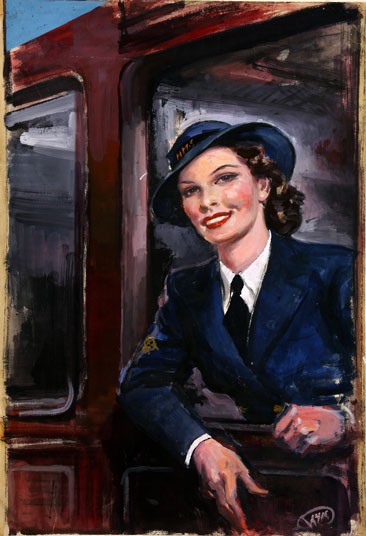 Some of the images are affectingly existential - 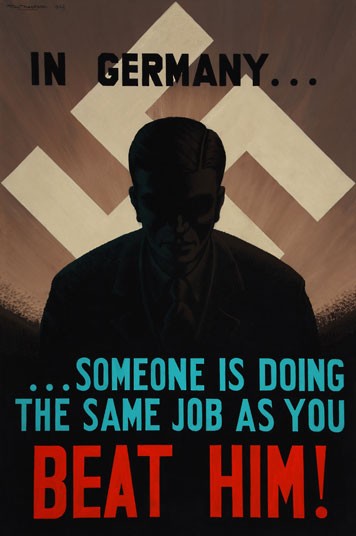 This one makes me feel quite odd, imagining a wartime viewer imagining his Nazi counterpart - it's somehow vertigo inducing.

I still get sentimental about Mr. Churchill.  I think how terrifying it must have been to hear these words, coming over the crackling wireless, and yet stirring, too:

...The Battle of France is over. I expect that the Battle of Britain is about to begin. Upon this battle depends the survival of Christian civilization. Upon it depends our own British life, and the long continuity of our institutions and our Empire. The whole fury and might of the enemy must very soon be turned on us. Hitler knows that he will have to break us in this island or lose the war. If we can stand up to him, all Europe may be freed and the life of the world may move forward into broad, sunlit uplands.

But if we fail, then the whole world, including the United States, including all that we have known and cared for, will sink into the abyss of a new dark age made more sinister, and perhaps more protracted, by the lights of perverted science. Let us therefore brace ourselves to our duties, and so bear ourselves, that if the British Empire and its Commonwealth last for a thousand years, men will still say, This was their finest hour.

Of course, in the end, it all turned out well. At the time, though, these were deadly serious words.  Like these images, they were meant to prop up the tottering morale of a vulnerable little island's people.  How lucky we are, from the comfortable distance of 72 years, to be able to appreciate Mr. Churchill's speech as rhetoric, and this wartime art as a curiosity, even as kitsch.  It could have turned out quite differently...
Posted by Muscato at 1:39 PM

Email ThisBlogThis!Share to TwitterShare to FacebookShare to Pinterest
Labels: Brenda, Ladies of Yesteryear, Mr. Churchill, Musings, On This Day