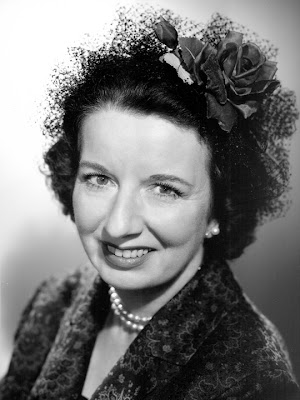 Birthday richness today, in the persons of two of the funniest people I know, both of whom turned potential liabilities into their stock in trade.

Ladies first (although in this company, that's a tough choice):  Mary Wickes was nobody's idea of a Hollywood star, clocking in just shy of six feet and possessing a face blessed with, shall we say, strong features.  Still, something clicked when she was on screen, and from the start her wry presence proved a match for even the strongest competition (and she started with just about the strongest possible, holding her own against no less than Bette Davis in The Man Who Came to Dinner and scoring big as a longsuffering nurse).

After a successful run at Warners, she moved seamlessly to television, where her ability to play off stars like Lucille Ball and Doris Day gave her career a longevity that many much bigger stars would have envied.  She worked steadily into her 80s, ending with a turn in the Susan Sarandon/Winona Ryder Little Women; her Aunt March works every bit as well Edna May Oliver's in the peerless 1933 Hepburn edition.  You may not be surprised to learn she never married... 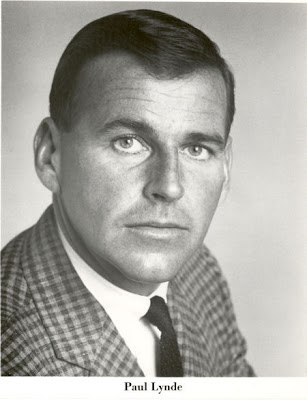 ...nor, for that matter, did today's birthday boy, seen here looking rather more sedate than was his wont.  Paul Lynde, who first burst upon the scene in that cradle of fame, New Faces of 1952,* was about as far from leading man territory as Wickes was from pinup stardom.  Even so, audiences responded to his incredible timing and genial bitchiness with an enthusiasm that seems inconceivable given the era.

Character men don't often get the juicy little parts (scheming secretary, dotty neighbor, deluded dowager, flighty aunt) that their female counterparts do (and that allow them to become general-public Beloved in ways that belie the scale of their roles).  Nonetheless, Lynde turned the smallest parts into little tours de force of innuendo and arch double-takes, and as Uncle Arthur on Bewitched (the Valhalla, in its way, of glorified character stars) achieved a kind of camp nirvana.  I can only think it was instructive (and beneficial) for those of us who were children of the '60s, sitting with our families in front of the flickering Mediterranean Fruitwood Veneer Consolette, to soak in the richness that was Lynde, Marion Lorne, Maurice Evans, Agnes Moorehead,** and the rest of the treasurable cast of zanies and oddities surrounding Elizabeth Montgomery and the Darrin of the moment - some of us, at least, thinking, "if they can get away with that, why can't I?"

Lynde really came into his own, of course, on The Hollywood Squares, dishing out slyly catty one-liners that must frequently have soared over the heads of many in the prime daytime-TV demographic, bored housewives (but that made some of their kids feel very sophisticated indeed).  He doesn't seem to have been the happiest of people, but I can't help feeling that he must, at the right moment, have been peerlessly good company.

The success of people like Miss Wickes and Mr. Lynde reminds us that, at least some of the time, talent will out, for even the gawkiest and queerest of us, and I think that's a reassuring sort of thing, what with being more a hint of both myself.  In whatever ineffable realm they now inhabit, aged 102 and 86 (only!) respectively, I hope they're sitting down over a celestial cocktail and congratulating each other on their improbable success.

* Lynde, Alice Ghostley, Eartha Kitt, Carol Lawrence, Mel Books ... it really must have been a hell of a night in the theatre, no?

** Odd, isn't it, that Wickes never did a Bewitched. She did turn up on the spin-off, Tabitha, but somehow, by that time, the magic was gone (from the series, that is - never from Mary!)
Posted by Muscato at 3:11 PM