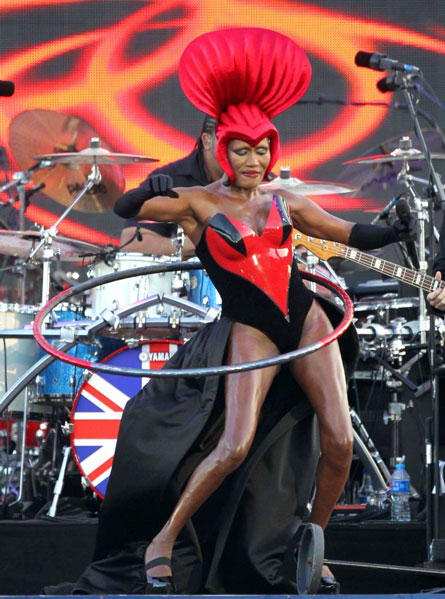 In a span of four days that took in everything from 1,000 ships on the Thames to a right royal RAF fly-past, she was the only thing that threatened, even for a moment, to steal focus from the Jubilee girl herself.

But only for a moment, for this was - Grace aside (not to mention Annie Lennox, Kylie, Dame Shirley Bassey, Sir Elton, Sir Tom - he is one by now, Mr. Jones, isn't he? - and many more) - entirely the trimph of Elizabeth II: indomitable, inexhaustible, as unlikely and fabulous in her own way as Grace is in hers.

Today, I thought, watching her stand - suddenly alone, temporarily without her Duke - at the end of the service at St. Paul's, she enters history.  I wonder what on earth she made of the hula-hooping Amazon who so enthusiastically celebrated on her behalf?
Posted by Muscato at 2:38 PM