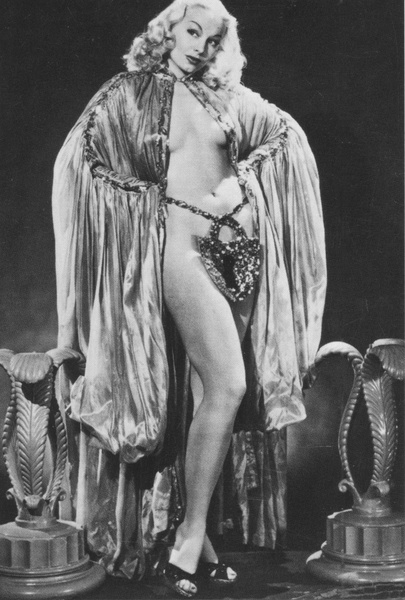 ...Willis Marie Van Schaak.  If nothing else, the name she chose for herself scans better, as we learn at the climax of The Rocky Horror Show (not to mention its Picture Show).  Lili St. Cyr is one of those massive pop-cult phenomena who has more or less entirely disappeared as a person.  She was for a long time a big star in burlesque, a novelty star in Hollywood, and an entrepreneur who for a while rivaled Frederick as a peddler of naughty underwear.  Now she's a passing Rocky Horror reference and a puzzlement to many people who hear her name invoked in Pal Joey's strip-themed number, "Zip."  She would have have been 94 today.

There must some kind of powerful juju in this date.  For one thing, it figures in surprising ways in the lives of British Royalty.  Today, of course, Her Majesty celebrated, officially, her 60th anniversary, her Diamond Jubilee.  It rained (being England and all), but the river pageant was suitably grand.  I wonder if it passed through the Queen's mind, though, as she motored down the Thames on her stately barge, that today was also her Grandfather's birthday, George V having come into the world this day in 1865 (which makes one realize that she is someone who remembers, rather well, someone who was born the year the Civil War ended, but that's another story).  Beyond that, though, today also marks the anniversary of the formalization of the folie à deux that guaranteed her the Throne:  in 1937, her Uncle David married his divorcée, the erstwhile Miss Warfield (and Mrs. Spencer and Mrs. Simpson), at a rented chateau in France.  Today, certainly, was far more in the George V than the Edward VIII vein, and one can't help but think that's a very good thing.

Miss St. Cyr aside, other birthday boys and girls today only reinforce the strange power of June 3:  they range from the eternally fabulous Miss Josephine Baker to the televisual enigma and quasi-Vanderbilt Mr. Anderson Cooper, also taking in protean theatre legend Colleen Dewhurst (maybe the most present actress I've ever seen, albeit in two different basically mediocre plays), Hollywood heartthrob Tony "Yonda lies da castle of my Fadda" Curtis, silent superstar Mme. Alla Nazimova and 30s dynamo Paulette Goddard (of whom few have written better than our dear TJB), blowsy jazz diva Dakota Staton (whom I once saw on an off but still effective night in the Broadway revue Black and Blue - they rolled her on and off on a vast Deco set-piece), and the original riot grrrl, Miss Suzi Quatro (want to feel old?  She's 62), among others.

So:  God bless, not just Lili St. Cyr, but all of them, with an additional, heartfelt, Good on You Ma'am for today's jubilee girl, too.