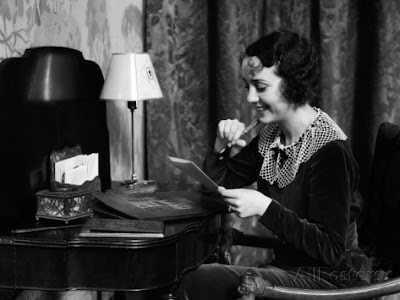 For no good reason except that we both have more than our wont of leisure these days, My Dear Sister and I have taken to writing long letters to each other.  Granted, they're e-mails, but still somehow it feels terribly Edwardian to be communicating in something other than statuses or Tweets...

In theory and on the surface, MDS is now a respectable retired lady on the cusp of entering her eighth decade (have I mentioned lately by just how wide a margin I'm the Baby of the family?  My poor parents were practically Abraham and Sarah, age-wise, by the time I moseyed along), but as with so many things, appearances are frequently deceiving.  She remains formidably On The Go, writing, lecturing, and, at the moment, taking on as her latest windmill assaulting the startled administrations of various women's-related museums across the country on the burning issue of Lesbian Under-representation. At several she has started guerilla campaigns to salt the boards of directors, which given the vastness of her address book and matchless ability to bully powers of persuasion is far less daunting than it may seem.

She also travels enormously, with a laundry list of late that ranges from leading a sailing expedition off the Croatian coast to bundling her long-suffering wife into the car for a driving tour starting from their home base just outside Boston and heading for the Finger Lakes before extending up through Prince Edward Island (apparently the Japanese Anne of Green Gables tourists are as legion and as rabid as ever, but she said it was just the same all very pretty this time of year).  And that's not including other recent professional forays to, among other scenic locales, Saudi Arabia, Australia, and Uruguay.

In short, she makes me look ever more like a slug, never a difficult feat to begin with, but one in which she has long excelled.  It has been all the more interesting then, as we write back and forth - given her unrelenting vigor - to talk about our concerns - inchoate, mostly, not quite fears, at least not quite yet - in regard to aging.

For instance, on Saturday, you see, I fell. Oh, not badly, really, not at all - it was if anything encouraging, as it showed that that sort of spill can happen and not be a catastrophe.  My mended breastbone held up quite completely, and if I suffered a skinned knee, ruined trousers, and a total loss of dignity, it was nothing worse than that.  For decades I've had an occasionally annoying trick ankle, one that gives out without warning or notice, and that's just what it did, unfortunately as I was stepping off a curb.  I lay there for a moment on the sunny pavement, took stock, and awkwardly got back up (I'm still less than grace in motion given the various grave insults to the person I've undergone this year).  The rest of the day was entirely successful (despite going to the theatre - even an experimental one - in ripped khakis.  What would a dandy like dear TJB think?), and I've had no lingering ill effects.

Passing on the story, though, got us thinking about getting older and the perils of falls.  MDS confided that she has of late been taking a special yoga class for women of her age, one that concentrates on improving stability and even teaches special falling skills; this seems terribly sensible and practical.  Our grandfather was notable, at the end of his long life, for falling only once, as he got out of his car one icy day in December.  He was 95.  He went inside, got into bed, and, waiting only long enough for each of us to come and pay our respects, died six weeks later, as he didn't have the slightest interest in being the kind of old duffer who went around falling down in public.  That seems a drastic response, but one I can respect (although I have no intention of emulating it, at least at the moment).

Memory, as one might imagine, is another area we think about, and it's really been rather a surprise to learn just how concerned she is.  We have never had much in the way of dementia in the family, despite a generally robust habit of excellent longevity, although our dear Grandmother Muscato did get rather vague in her last few years - quite happy, still very engaged in things, and always perfectly turned out, but with a window of conversation that eventually shrank to about twenty minutes.  I fight off any concerns I have on the subject by doing the New York Times crossword puzzle first thing every morning, and while my average scores took a significant hit this spring (a side-effect, I'm told of the one-two punch of general anesthesia and the external pump used while my heart was, as it were, up on blocks for a couple of hours), in general I feel like it does the trick.

Even so, more than occasionally one finds oneself grasping for a perfectly obvious word or name.  This past weekend at dinner with friends, for example, we were talking (you won't be surprised, I think, to know) about movies, and I found myself fumbling around for a star, able to describe the remarkable Mlle. Simone Signoret only as "that fat Frenchwoman who hated Marilyn Monroe."  Really if it weren't for the sometimes obtuse ministrations of Siri, I'd feel quite idiotic.  Still, I don't think I'm anything out of the statistical norm, nor for that matter is MDS.  Still, we're both doing what we can to stave off the reaper, and I have hopes that we'll both continue doing so for a good long time.

This morning I was down in our condo's dank gymnasium, putting in my time on the treadmill (something I would not all that long ago would have said to be as unlikely a prospect as forgetting the name of Simone Signoret, but here we are. It's a new world, chez nous...).  I had the place to myself and so was playing the music loud, trying to decide whether it was amusing to be trotting away to the strains of "Let's Have a Kiki" or simply a case of mutton hankering fruitlessly away after the accoutrements of lamb.   Well, I thought, in either case, it will be good fodder for a letter.  Or, for that matter, for a blog post, here on a fine summer Tuesday...
Posted by Muscato at 2:36 PM