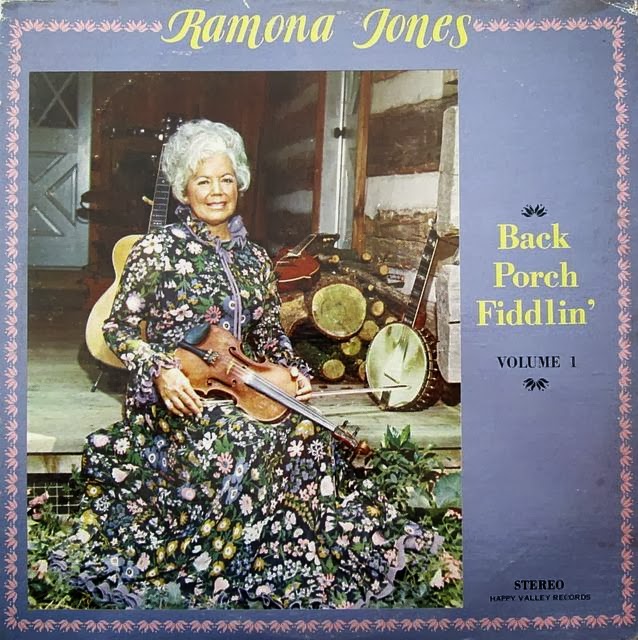 I suppose it wouldn't be entirely a surprise were I to admit that I have something of a passing familiarity with back porch fiddlin' myself...

...although not, I should hasten to add, in any context that included a prairie dress that appears to be made from early '70s guest-bathroom wallpaper.

Ramona joins us today, not only as an opportunity for some mild innuendo, but because seeing her reminded me of a lady I've been meaning to chat with you about.

As you may remember, we recently took a cruise (have you seen my brochures? queries the Hyacinth in me coyly ...).  Well, it was lovely, but in advance I was just a tad concerned, for it was only after we'd confirmed our reservation and gone past the point of no return (or at least of no refund) that I learned that we were to joined on the voyage by a largish group.  These kinds of charter groups happen all the time - all kinds of clubs, association, and persons of various affinities take up cabins numbering from a few dozen to several hundred, and the Interwebs are rife with horror stories involving everything from church choirs run amok to unexpected encounters with the Hell's Angels.

The group we'd be sharing with wasn't quite that unnerving, but it did seem to portend a certain amount of built-in trashiness.  It was a group organized by and catering to the fans of a certain cable-TV luminary who's been in the news a lot the last year or so.  In order to avoid a descent of said fans, screeching in outrage at my lèse-majesté, let's just say this notorious food-world star has a name that rhymes with Challah Bean.

On boarding, we were not terribly pleased to see a sizeable gaggle of purple tee-shirted Challahites clogging the gangway and milling about in an aggrieved sort of way.  We soon learned that the brave souls who through thick and thin (as a group, by the bye, they tend far more toward the former) have maintained their allegiance to their troubled goddess tend to have a distinct chip on their shoulders. It was as if they were half dreading and half hoping that they would be asked to defend their heroine's essential greatness of spirit, not to mention her affinity for butter, and were only all the more annoyed that that didn't seem to happen.

Once we set sail, though, the purple legion blended fairly seamlessly into the general mix of the ship's population, and we wouldn't have given the group another thought had we not noticed, by the second night, that the great lady herself had clearly developed something of a fondness for a comparatively secluded corner of the Martini Bar.  We chatted innocuously once or twice, and I'm half-disappointed that at no point did she engage in any of the language that caused so many headlines.  She did, however, seem to be the kind of person on whose best side one would want to be very sure to remain.  Whatever her disposition earlier in the day - when she was obliged to lead her acolytes through a grueling range of talks, demonstrations, and photo ops - I can safely say that by 10:00 or so, she was feeling no pain...
Posted by Muscato at 9:07 PM