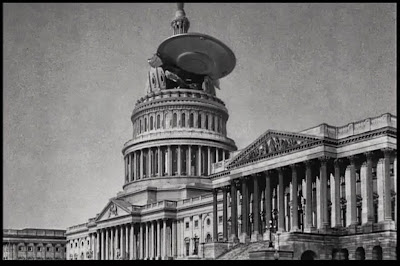 So, isn't this a... fascinating... time to be living in Our Nation's Capital?

Between the lunatics inside and the sadder lunatic outside who briefly electrified things this afternoon, really a flying saucer seems practically like the logical next step.

I am not a terribly coherent political commentator at the best of times, but the whole situation has me deeply annoyed and, worse than that more than ever disillusioned with the state of what's passing at the moment for our union.  The way that the most ridiculous, deluded, jingoistic, religion-ridden, dogmatic element of the country has hijacked the system would be hilarious if it weren't so potentially damaging.

And where will it all end?
Posted by Muscato at 9:15 PM