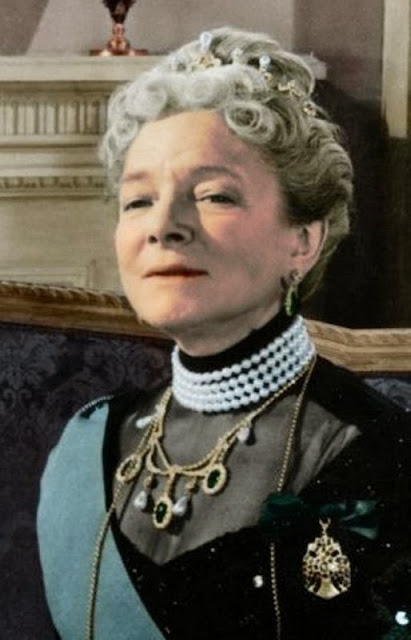 Miss Helen Hayes, First Lady of the American Theatre (seen here as HIM Maria Feodorovna, Dowager Empress of Russia) turns a spry 113 today.  That is not in itself remarkable.

No, what's remarkable is that this woman, long considered the brightest light on Broadway and no mean slouch, for that matter, in movieland (She nabbed her Oscar early on and was for decades a prestige fixture in Hollywood, the first of the Very Special Guest Stars) shares her birthday with someone who for a while looked set to shoot to the very far opposite extreme - the volatile, ridiculous, and deeply, deeply untalented Miss Bai Ling.  She's calmed down lately, but her name on a cast list is still a signal mark of crapulence.

As if that didn't drag the cosmos off its axis far enough, Guess who they share the day with?  Why someone who looked almost as good in a tight sweater as ol' Bai - unlikely posthumous cult favorite Ed Wood.  If only he'd had the chance to work with Hayes instead of so many of his era's Bai Lings, imagine what might have been.

On the other hand, maybe we're all just better off admiring Helen's way with a sash...
Posted by Muscato at 10:19 PM