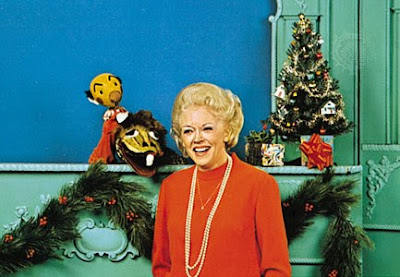 Christmas, as the saying goes, is for children. This presents a certain dilemma for those of us who rather like Christmas, but of whom it is possible (if rather reductive) to say that we simply can't abide children.

In my defense, I can say quite truly that I wasn't all that fond of them even when I was one. They seemed noisy and unpredictable, something I now enjoy greatly in singing stars and screen legends, but which in person, then and now, has fewer charms.

Even my favorite programs as a child bore this out. Captain Kangaroo, with its gathering of middle-aged gentlemen in jeans and naval uniforms, enacting skits that were old when Vaudeville was a tot, was far preferable to the harsh urban realities of Sesame Street. And of course, a Saturday wasn't complete without time spent in the gentle company of this dear lady d'un certain age and her friends (Zoom I made an exception for, which in later years I realized was because it was essentially the pre-teen equivalent of a Saturday night at The Saint, minus the rampant promiscuity).

So here are Kukla, Fran, and Ollie, wishing us a Merry Christmas across the decades. I knew them, not from their '50s incarnation, but as the hosts of The CBS Children's Film Festival, the kind of good-naturedly improving kiddie show that's fairly impossible to imagine existing today. For me, the KF&O bits were always much more engaging than the frequently baffling short films from around the world, and having to sit through 20 minutes of goings-on involving a happy Bulgarian family was the price paid for the joy - truly - of watching a sweet older lady talk with a puppet crocodile.

My Christmas gift for anyone finding themselves in a similarly nostalgic frame of mind is to direct you here, and to echo the Kuklapolitans in saying, "Merry Christmas, Frannie..."
Posted by Muscato at 10:39 PM