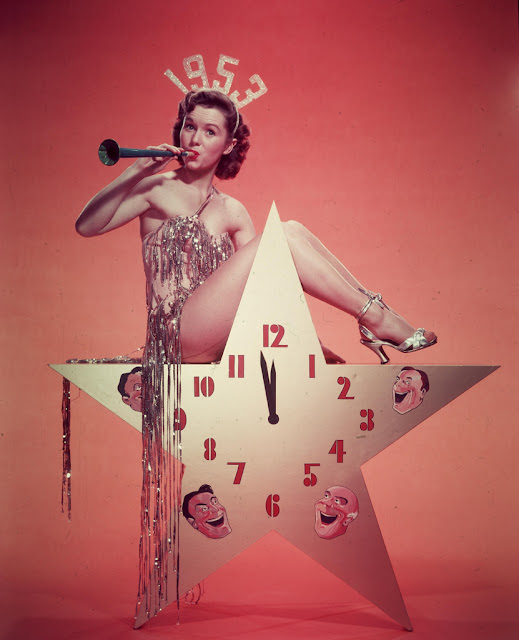 As if there could be any other star, this New Year's Eve. Hollywood's sweetheart, with so much about which she has no idea at all ahead of her, and as much a trouper in the stills gallery as she was everywhere else.

I'm as done with 2016 as anyone, but even so I can't say it's My Worst Year Ever, at least in the most personal of senses. This has been, after, not a year in which I was sawed nearly in half, spent a couple of hours with my heart outside my body or nearly so, got stitched back up, and then had a pulmonary embolism, and since that's not something I can say about 2015, there you go. Still, I have admit this year was relentless in trying to top all of that and, in the long haul, with the election, it just may have. We shall see.

Which, more than ever, is rather how one has to approach this New Year. We'll need to keep our wits about us, that much I know, as 2017 unfolds, despite whatever storms and losses come our way. I am wary, but unbowed, and working hard to keep some of the optimism that Debbie held on to, right to the very end.

We're having a quiet New Year's Eve - something that I've learned to love, really, in the years since I gave up hosting the annual party, which was great fun for a very long time (and involved over the years, in places from Manhattan to the Sandlands, all sorts of amusements and bad behaviors). Just us and the Retired Bikers, a good dinner at our favorite little boite, and then home, likely long before the witching hour. I'm going to try and stay up, though, this year, just to see the old one definitively off. Before it's all over, in the wee hours of the first day of the year, I'll sit alone for a few moments and think. Of what's past and what's lost, from this year in which the Mister and I both lost our last parent; in which together we lost our darling Koko, the light of our shared lives for so many years; in which it seemed an inordinate number of the great and the good, the truly famous and the closer to home, all set sail for Fabulon; in which, too, the great wide world seemed to grow a little less hospitable, a little less predictable and safe. That mostly shows, I know, how very protected, even coddled, a life I lead, but still it's unsettling. I don't know what the new year will bring, but I hope at the end of it we're all still safe and sound.

And I hope that's not too much to hope for, nowadays.