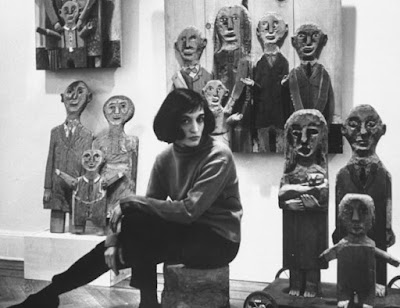 The misty shores of Fabulon have gained a major dose of Pop glam this week with the passing thence of the artistic enigma once world-famous, like Madonna or Cher (or, for that matter, Charo), by only her first name: Marisol.

At the start of her long career, she was initially a great deal better known than a fellow artist with whom for a while she was associated, Mr. Warhol, and to me at least much of her work holds up as well as or better than all but the best of his.  A student of Hans Hofmann and so in some ways an Abstract Expressionist by association, Marisol (née Escobar, in case you were wondering) tempered Pop's sometime cloying whimsy with a rigorous eye and a very personal vision.  Her range is specific, if not narrow, and can be relentlessly self-referential (I'm especially fond of her Cocktail Party, an assemblage of guests in a dizzying array of mid-60s outfits, all of whom are one facet or another of the artist herself).  At its heart, though, is a focused and clear-eyed examination of how people, individually and in groups, present themselves.  It's this human focus that diffuses the ironic distance that can make Pop seem so chilly and surface-obsessed, and it enlivens the best of her works in a way that puts them firmly in the tradition of great sculptures in wood, from Ancient Egyptian noblemen, striding resolutely into eternity, to Medieval saints, so preternaturally still and waiting.

As a woman, she had to fight being dismissed as a lightweight or being pushed into niches that diminished the significance of her work, both things that her association with The Factory and its scene only intensified. Intense, quizzical, and with a natural air that blended shyness and hauteur, she looked something like the secret offspring of Picasso and Louise Brooks. This might have made her a magazine darling, but it probably only increased her sense of distance from the Pop - and pop - scene.

Despite her success, the artist had little to no interest in playing the art world's games or even in keeping the formidable reputation she developed during her first years of fame.  She traveled the world, made her art, and stuck for decades to the motto she first threw out to a reporter in 1964: when it came to what other people might make of her, "I don't care what they think."

Well, I think she was rather fascinating, and I'm sad to hear she's moved on...
Posted by Muscato at 11:10 AM