City by the Bay 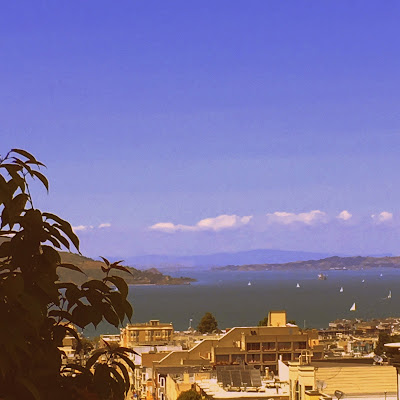 Except for the hills, it turns out that what San Francisco reminds me of is Alexandria (the real one, not the DC suburb, of course). Both are cities profoundly shaped by water; both feature scads of fabulous Beaux Arts architecture (although San Francisco's are in rather better shape on the whole) juxtaposed with a dizzying array of other styles; and both seem to feature a disproportionate number of deeply attractive - and an equal number of deeply outlandish - people.

This being a work trip, the days are long and dreary, and at the moment they're made even more annoying by having several of our little gaggle of human-resources professionals at each others' throats most of the time. At least that relieves us of the obligation to spend much time together in the evenings, and so I've been out and about on my own.

Ah, but not entirely, for I had an absolutely enchanting first evening here over the weekend. Yes, my knight in shining armor showed up to fetch me away from the dubious charms of a business-district hotel and show me a little of the Real City.

Yes, I had dinner with none other than our dear Mr. Peenee, and I have to say that I, at least, found it all a distinct success.  He's all you would imagine and more, and yes, we did talk about you, all of you. He was nicer than I am, especially about you, which should come as no surprise.

And if I'm very good, I hope to have the chance to see him again. He's great fun.

In no particular order, a few random thoughts:

I've decided I have a talent that amounts almost to a superpower: the ability to arrive invariably in a new city just in time for the start of the seasonal public-radio pledge drive. I cannot tell you how my heart sank on Monday morning when the alarm went off at the usual appalling hour only for me to hear "...and with your gift of more than $25 a month, a lovely totebag." What is it with public-radio audiences and totebags?

All those hours on the treadmill must be paying off, for I find myself entirely undaunted by this city's hills. I've climbed all the way from the waterfront to the top of Nob Hill and not once found myself even slightly out of breath.  Too much more of this and I'll have to stop playing the invalid card altogether. Next thing you know, I'll no longer be able to persuade the Mister than I'm just not up to vacuuming...

I'm find it more than a little depressing how very much this city reinforces just what a dull, provincial place Our Nation's Capital is. Chinatown here still bustles with actual Chinese people; Washington's is a sea of Starbucks and Chipotle and worse. There's even an apparently bustling zone of dirty bookstores and burlesque houses both neo and retro (anchored by the venerable Condor, once home to the legendary Carol Doda); Washington hasn't been so much gentrified as sterilized.  I know it's easy for a casual visitor to get wrapped up in how scenic and charming it all is, but still. It's going to be hard to go home.

Except that I cannot tell you how much I miss those damn dogs. Oh, and the Egyptian, too.  Frankly, I don't know how any of them would do on the hills...