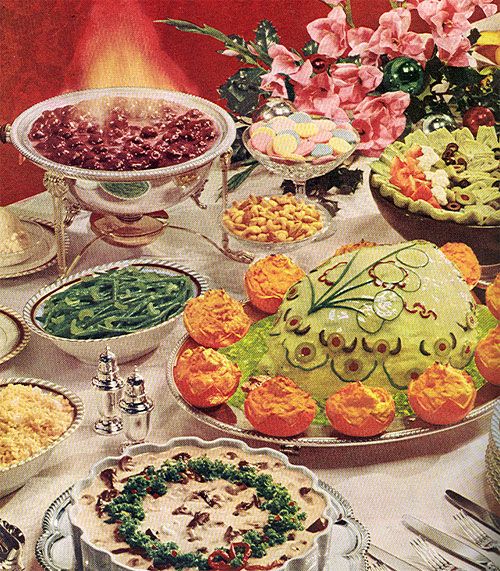 My office can sometimes seem like a bit of a backwater; oh, we're busy enough, but one way or another, many of us are not exactly the hard-charging Type-A types one thinks of as minions of a busy multinational. What it can seem like, from time to time, is like a prelude to life in a well-run sunset home. And in general, that suits me fine.

This week, for example, the little gang that I think of as The Nice Ladies (colleagues - of both or rather all sexes, actually - of refined deportment and, mostly, small-town backgrounds) decided to throw a retirement party for one of their number.  Seeking a theme, they decided to focus with even more laser-like precision than usual on the foods of their people (and who am I kidding? It's more or less my people, too) and go retro.

Which they did with a vengeance.  It's been many and many a year since I've seen such a panoply of quivering Company Jello, such an array of bars and squares, such a superabundance of Hot Dish (and not the kind that involves the two cute guys over there on the other side of the bar, either). Tater tots were liberally employed as casserole toppings (for those times when french-friend onions just aren't hearty enough), and our little break room was awash in culinary delights for the creation of which more cans of Cream of Mushroom soup were required than even I would have dreamt to be possible.

It was, in its way, really rather heartwarming. What it most definitely was not, alas, is within the scope of my current regime.  I - once such a staple of the heartier kinds of church supper, a charter member, as it were, of the Molded Salad Appreciation Society - was reduced to the sidelines.  I nibbled my little tossed salad and, off in the corner, had my sad little morsel of leftover glazed salmon.  Even an offering that was the living (well, figuratively) incarnation of that immortal cabaret number, "Lime Jello Marshmallow Cottage Cheese Surprise," went untouched by me (if not by my ravenous colleagues - oh, they can snort, those international sophisticates who go on and on about artisanal this and "that's not how we did it in Indonesia" that - but just turn them loose on a good Green Beans Almondine-with-Velveeta and they're like locusts).

And then I fell. Hard.  Only one choice defeated me, and while I'm not proud (and I'll be working it off through the coming weekend, I'm sure), I have to admit it was worth every bite.  The devil was in it, this crack in mid-century snack-food form, and its siren song was irresistible.  I was even offered the recipe (drawn from a small Lutheran congregation in Minnesota's Eisenhower-era cookbook), but I refused, as it would take more strength than I possess to resist the Karo Syrup aisle at the supermarket these next few weeks, lest the call of Corn Flake Coconut M&M Bars prove too strong.

All involved agreed that the event was a great success, and I have to say that there does seem to be something cheering, on a gray and chilly workday, in pausing to appreciate a cultural phenomenon that increasingly seems more exotic that such now quotidian staples as Phở or a fiery Ethiopian Doro Wot. I may have to look around and see if there isn't a Presbyterian potluck coming up somewhere near home - just to drop in and observe, you know. And maybe see what the ladies these days are doing with corn flakes...
Posted by Muscato at 4:22 PM