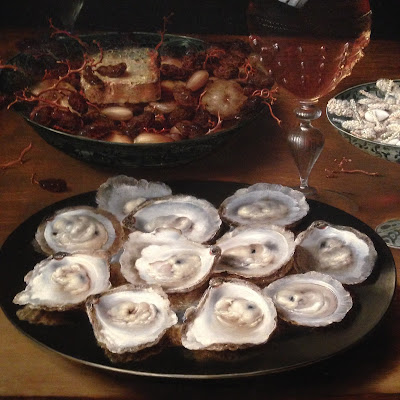 You know, there are a lot of oysters at the National Gallery.  I mean in the paintings; we were there this past weekend, My Cousin the Architect and I, and while we enjoyed our lunch in the Garden Café, sadly the otherwise excellent buffet was oyster-free.  But in the Dutch still lifes, and even tucked here and there amid the Renaissance banquets?  Those bad boys are everywhere.

They gleam, as here, temptingly on dark platters on the damask cloths.  They lurk among the at times too-vivid depictions of heaped dead pheasants and glassy-eyed trout; they're even heedlessly tossed underfoot by gourmandizing burghers (the process of trying to eat oysters while wearing a ruff strikes me as daunting, to say the least).  It was all sufficiently tantalizing that we made to sure to find some that night, and we enjoyed them, I think, almost as much as the burghers.

It was nice having a houseguest, and really by our modest standards it was something of a whirl, taking in, along with the museum gallivant, several very good dinners and a day of expeditions to local stately homes (Mount Vernon and a lesser light - one very conscious, as it turned out, that it didn't have quite the éclat of its better-known counterpart, having been built by a Founding Father, but a relatively lesser one. "We have some very fine woodwork, you know," said our guide, as if in hopes of making up for the lack of beguiling cherry tree legends).

I hadn't been to Washington's cosy little country place since I was a small child, and in the decades since then it's turned into quite a phenomenon - a sort of history factory, really, in which one submits docilely to the attentions of a series of increasingly laconic docents who shepherd you onto what amounts to an assembly line through the house.  In memory, in days gone by one was taken through by a Colonial Dame (they own the place, you know) in period dress, who nattered on at great length about wallpaper patterns and Martha's taste in everything from tablesettings to cap-ribbons.  No more; "Keep up, please, and on your way past note the butler's pantry before you leave the house" barks a polo-shirted older gentleman, and before you know it you're dumped unceremoniously back out into a side yard.

We did enjoy walking about the grounds, and we encountered a piquant vignette at the family tomb, where for reasons unknown a newly elected congresswoman from California was laying a wreath and paying her respects.  I don't know about you, but were I to want to make the best impression at such a comparatively solemn (if wholly unnecessary) event, I probably wouldn't go for black leggings and a sweat shirt.  She seemed slightly startled that there were others - tourists - present, and after her moment's silent in front of the black wrought-iron gates, she gave some awkward and all too clearly impromptu remarks - bits of her stump speech, apparently, strung together with what seemed to be distant memories of a long-unthought-of civics class.  "We should always remember," she concluded (to the relief of all), "that we live in the greatest country in the nation."

The Cousin and I just looked at each other, trying not to snicker (too much).  It's not quite up there with "First in War, First in Peace...", is it? Well, she tried, I suppose.  Bless.

I wonder if the General and his stout Missus liked the occasional oyster...
Posted by Muscato at 8:57 PM