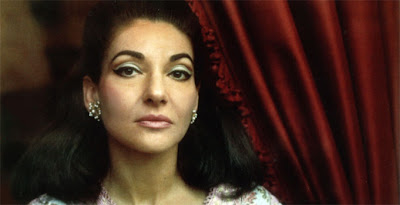 There must be something about the day (or a day about nine months ago), for the little girl born Sophie Cecilia Kalos some 89 years ago today is only one of a bouquet of geniuses who celebrate today.

Joining the diva who became Maria Callas are everyone from M. Georges Seurat (who had such a memorable Sunday in a Park) to the fetching Miss Lucy Liu (a remarkable actress still, I think, in search of a great role, although the Kill Bill pictures came close).  Adding to the festivities are Broadway Divo Adolph Green, jazz thrush Sylvia Syms, stage luminary Julie Harris, and couturier/martyr Gianni Versace.

Of course, every silver lining has its cloud, and with all this richness we must also accept the regrettable Alexander "I'm in control here" Haig, television staple Cathy Lee Crosby (whom I've just learned is not, in fact, Bing's daughter, and who therefore makes even less sense than I'd thought), and onetime poptart, now pop-zombie Miss Britney Spears.

I was going to try and come up with something clever about Miss Callas, and when I thought of her, I thought (as I often do) of dear Mr. Leo Lerman, about whose marvelous journals published as The Grand Surprise I've often waxed rapturous.  The book is downstairs, and I am up; being lazy, I therefore Googled the pair, Callas and Lerman, and was startled to see in today's New York Times the obituary for Lerman's longtime companion, artist and looker (it was practically a second career, as it was for other 20th century luminaries like Ned Rorem) Gray Foy.  It's a lovely thing, this obituary, and I recommend it highly; it may not say much about Miss Callas, but it says a great deal about her world, which has, with Foy's passage to Fabulon, receded just that little bit further from our lesser days.
Posted by Muscato at 12:52 PM