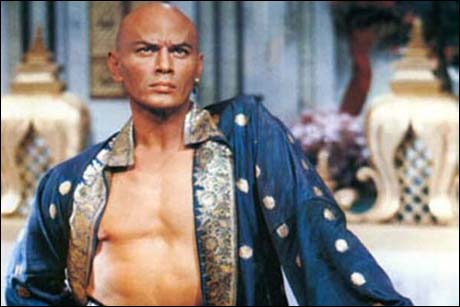 Because there's never a bad reason to get a good look at Yul Brynner,
nearly shirtless. No Puzzlement there...

Over in the FaceBookVerse, dear Cookie has come up with a list of 10 Things He Doesn't Understand, and he's challenged his Gentle Readers to do the same. Some dares I can't resist, so herewith, just that number of cultural phenomena that leave me cold:

1. The Apparently Endless Fascination with "Origin Stories"  Does one really care whether or not Willy Wonka/Batman/The Mad Hatter had fulfilling childhoods (it would seem that almost universally, they didn't)? It feels increasingly as if every new film has to start with 30 minutes (at least) of backstory, and given that any film not actually drawn from the works of Jane Austen seems obliged to end with a 30-minute (at least) Battle to the Death, it leaves precious little time for actual plot.

2. Vegetarian "Meat" Now that I'm eating more thoughtfully, I've radically upped my plant intake; much to my surprise, I actually enjoy a lot of it, but I remain perplexed by the fascination with trying to turn innocent vegetables and their byproducts into meat. Tofu, on its own terms, is a useful and, when properly prepared, even tasty element in a good meal. Tofurkey, however, is an abomination. When the following product popped up on my Facebook timeline, I knew it was all over. 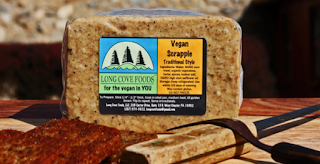 I'll give ten bonus points to any Gentle Reader who can tell me what exactly is "Traditional Style" about this horror show.  As a former Philadelphian, I feel as if someone ought to sue. Scrapple can be many things, but mushroom-flavored corn mush is not one of them.

3. Sports That Involve Caring About What Happens to a Ball  I know it's stereotypical, but this queen just doesn't have time for football. Or basketball. Or baseball, or any of them. You name it, and it bores me. I can work up a tiny amount of half-feigned enthusiasm for non-American football (aka soccer), but only because I think Mr. Muscato, as a proper Egyptian, might divorce me if I didn't. Tennis I can sort of get, because its so pretty, but even then, it all comes back to the damn ball, which just mystifies me.

4. "Deep House" Once upon a time, I enjoyed going dancing, and I adored the music. My college days were glorious for dance music - late disco, New Wave, New Romance, Hi NRG, a package that we lumped together under our own rubric: DFS, for "Disco Fag Shit." It was the Pointer Sisters instructing us to Jump, it was Aretha asking us just Who Was Zooming Who(m), it was Love Shack and Gloria and, perhaps the very most of all, it was all about Raining Men. Songs had killer vamps, every month seemed to bring some new synthesizer innovation, and the dance mixes all had explosions, dramatic pauses, and big finishes.

Then something happened. The music got, somehow, both more frantic and more trancelike. The vocals seemed to get lost and nothing but beat took over. The DFS age faded away, eclipsed by music we learned was "House," and then an even thumpier version called "Deep House." And dancing - save for some magical moments when just enough of us 80s bunnies get together - has never been the same.

Of course, Deep House has been succeeded by any number of flavors of the year and month since, but I don't blame any of them (although if anything I loathe them even more) nearly as much...

5. The New Golden Age of Television Can't do it, although God knows I've tried.  Over the past decade I watched a Mad Men or Two, I tried to care about the Midwife, I ventured into Orange is the New Black, you name it. For whatever reason, I can happily watch all 30 episodes of a Ramadan soap opera starring Fifi Abdou or the fabulous Samia Gamal, but the stateside or British sensations tend to bore me stiff.  Even The Crown - something that in theory could not possibly be more my cup of tea - fizzled out after a few hours. It's a failure of my imagination, or my patience, or something, and I totally take the blame, but there it is.

6. Reality Television And it's not like I'm wallowing in junk, you know, as a result of #5. If the shows mentioned above are the crème de la crème, TV-wise, the very other end of that spectrum involves all things Kardashian/cooking/surviving/you name it. If I'm mildly ashamed that I can't make it through year after year of whatever the latest prestige mass sensation is, I am concomitantly relieved that at least I've never cared about a Housewife, however Real she may purport to be. Whenever I've tried, it all seems like some sort of horrible, low-rent, Dynasty-themed improv session. If I wanted to watch untalented amateurs wax histrionic, I'd go back to improv myself. And that, I think, I'm never going to do.

7. Lulu Garcia-Navarro I've been an NPR junkie for decades. I worship the ground Susan Stamberg walks on; perhaps someday I'll be one-tenth as sophisticated as Sylvia Poggioli ("from Roma"); and to me one of the great privileges of being a Philadelphian (as noted above) was that Terry Gross might just be around the corner (for a long while, my pal Miss Rheba worked at a video store she patronized, so we often had something of an inkling as to who might be Fresh Aired in the next week or so. "She just asked for all our Katharine Hepburn movies - you don't suppose, do you?"). Weekends were - are, for better or worse - all about Weekend Edition, and All Things Considered burbles away in the background most evenings.

Today, though, I feel as if my favorite radio outlet is at something of a loose end, and the most prominent symptom of that, I've decided (aside from the endless airing of Car Talk, the on-air equivalent of papers continuing to star Peanuts after all these years) is the too-eager, frequently clueless-seeming new Sunday morning host. Her name may almost be up to NPR's legendarily eccentric standards (it is, after all, a place where, say, a Linda Wertheimer might as well be Jane Smith), but little else is. She giggles, she is humorlessly solemn; worst of all, she seems entirely at sea during the program's trademark Puzzle segment. I'm not all that fond of the network's other new on-air talent, but with Lulu back in town, I can honestly say: come home, Liane Hansen, all is forgiven.

9. Smoking in Any Form, Including All The New Ersatz Variations This, I fear, I'm almost as humorless as Lulu about, and even more likely to wax evangelical.  It's 2017, we know what it does to us, and while I realize that it's an addiction that's almost without parallel in its grip, it's just plain time to stop. It looks cool in old movies, maybe (but all I have to do is think about the last days of Bette Davis or the gentleman up above to get over that), but in person, I can assure you that it's nothing but nasty. And all the new steam-based, gadget-centric alternatives are no better. That my own little issues in terms of arterial circulation may have something to do with my parents' 24-hour chainsmoking when I lived at home has only sealed the deal: stop smoking!

10. Piercings Other Than The Ear Lobe Here's where I enter full-blown get-off-my-lawn geriatric curmudgeonliness. I'm not even going to consider the most extreme forms of this nonsense, which involve parts of the body not normally featured in a family(ish) blog; I'm at the point where I think one hole in each ear is enough, with possibly - just possibly - one more, not involving cartilage, if one absolutely insists.  Provincetown was chock-a-block with handsome men with great holes driven through their septums (septa?), and I can't tell you the number of waitresses I've encountered lately, one side of whose faces appear to have been used, badly, for sewing practice (possibly for the blind). I had my own ear pierced once - for more than fifteen years, in fact, until the good people of Golden Handcuffs noted that it might make life during my first assignment in West Africa rather too interesting for my own good. I might well get that ear re-pierced in recognition of my approaching liberation (only 80-odd weekends away at this point. Who's counting?). But anything beyond that makes it all too clear that one has too much time on one's hands and a not particularly vivid imagination.

Goodness - that was fun. Perhaps I shall have to kvetch more often. And to think I was able to get through all of that without once lighting upon tattoos. I'll leave that blight for the start of my next 10 mystifications...

So what leaves you out in the cold in these low days?
Posted by Muscato at 3:58 PM