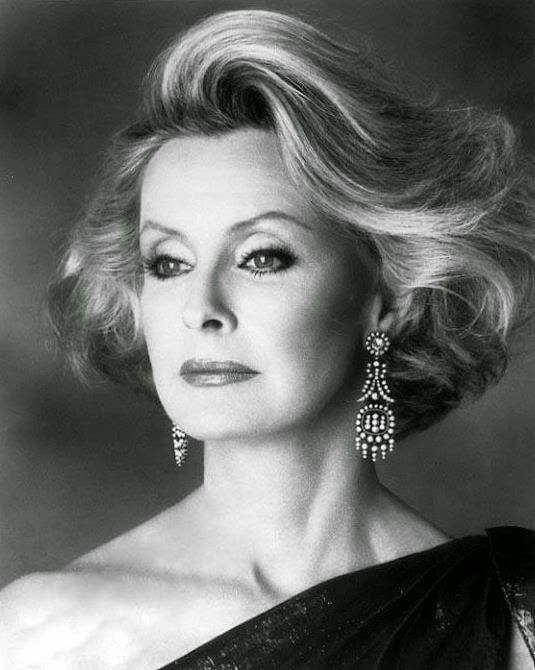 Ever since the sad news yesterday - that the lovely and gracious Miss Dina Merrill has sailed for Fabulon - I have been looking at and thinking about this picture.

Just one in a lifetime of glamourous portraits, spanning her charmed life from girlhood (all starched petticoats and propriety) through old age (elegance undimmed until the shadows fell), but somehow one that, to me, stands out.

In the same way that the famous picture of Gloria Swanson in the ruins of New York's Roxy helped inspire Mr. Sondheim to create Follies (and, more recently, helped give rise to at least one other rather marvelous work of art), I could see this picture as the start of something.  It is a portrait of elegance as armor, of beauty in the autumn. In it, Merrill looks both invulnerable, formidable in jewels, maquillage, and hair all of a kind particular to a very specific class and type. At the same time, in her expression there is a complex blend that might, to some, look like arrogance, or, to others, like regret. Or perhaps both, compounded like an expensive scent - one that might be familiar, one realizes, to Strauss's Marschallin or even, early on in her flight from reality, to Norma Desmond. It's a look keenly aware of time, and it's that awareness that takes it beyond simply being a picture of a handsome woman. There's a novel there, or a play, or at least a haunting song.

If she'd only ever sat for this picture, that might be enough to want to remember her. But she was for decades a working actress (more than a hundred credits on the old IMDb; she was no mere dabbler); she carried on the family tradition of hard work and great philanthropy instilled early on by her formidable mother, Marjorie Merriwether Post; and, not least, she was a last outlier in practicing the dying art of living well - not extravagantly (or at least not just extravagantly), but elegantly, immersed in a now all-but-vanished New York (and beyond) world of culture, friendships, and a sense of both responsibility and accomplishment.

Merrill may not have been the deepest or most versatile of actresses, but in her time and of her kind, she was very fine indeed. That beyond all that - beyond even the pretense of makeup and portraits - she was from all accounts a kind, gracious, generous, and funny person - makes it all the sadder that she's gone. She had a life of more bounty, in more ways, than can almost be imagined; it's a testament to the person she was the one grudges her not a penny or a moment of it.
Posted by Muscato at 10:44 AM