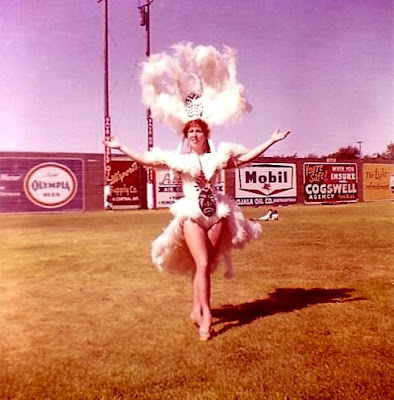 M is for... first appeared on May 10, 2009 and has become my Mother's Day tradition. Once, again, Happy Mother's Day, Mother Muscato, wherever you are...


No, she's not my mother. Actually, we lost Mother Muscato almost ten years ago,* and I'm still getting over the surprise.

Despite all she went through in her last couple of years - a familiar litany of complaints for women of her generation, the harsh follow-ons from everything that had seemed so au courant when they were girls, principally smoking - despite all that, I truly believed, on some level, that she was simply too strong-minded to let anything else, even cancer, have its way.

Until the end, she was a paean to the virtues of denial, stoutly maintaining that of course she was fine. Everything was fine. We didn't think all that much about it; her total distaste for bad news of any kind was an ingrained fact of life. When I moved away from home, after a few surprises I learned to phone home now and then for a rundown with her of elderly family and friends; "Oh," she'd admit grudgingly, "didn't I tell you? Cousin Adele died six months ago. Oh, come on, it's not all that sad - she was 87, for God's sake..."

I think, at the end, she must have thought a lot about just why she wasn't, in fact, a circus showgirl, or whatever it was that actually had been her dream a long ways back. I deeply suspect that where she ended up was pretty far from what she'd planned.

She married at the very tail end of the War and for more than half a century led a life that was was an almost entirely conventional blend of children, family, work, and church. In all that time, I don't think we ever, as you do, really thought all that much about her, if you know what I mean.

Until, of course, it was too late, which I didn't realize until we were clearing out her things. Having married into a family of packrats (just this side of Collyer-brother hoarding, really; Father Muscato had a warehouse he never told the Evil Stepmother about**), she went to the opposite extreme. Over time during her last couple years, she had pared her own possessions almost to nothing, easy enough to do when surrounded by her husband's and her children's plentiful detritus.

There were a few pieces of jewelry (charm bracelet, string of pearls, her mother's garnet set and her grandmother's jet mourning brooch...), a drawer full of neatly filed records (bills, taxes, mortgage) - and almost nothing else. She seems to have disposed of several generations worth of papers from her side of the family, from her great-grandparents' civil war letters to the correspondence her mother's mother had carried on with any number of interesting people she had met on long-distance freighter cruises (Great-grandmother Muscato shared a passion for penal reform with one, the gentleman who wrote 20,000 Years in Sing Sing; they had gotten to be chums somewhere between Shanghai and Juneau, and their letters had been numerous and voluble), and almost every scrap related to herself (this in a house that contained every Christmas card received since the Truman administration).

Except: in one dresser drawer, an unmarked envelope, large and faded yellow. In it were three or four magazines, story monthlies from the early 40s. There wasn't much to link them - they included a romance anthology, a "true confessions" format, and a Western, I believe. It was only as we passed them around, my siblings and I, that we noticed that each carried a story by an author whose name was an amalgam of our mother's mother's and her grandmother's maiden names.

We showed them to our father (already, although we didn't yet know it, trying to decide whether to wait until after the funeral to announce his engagement - but that's another story), and he said offhandedly that oh, yes, your mother had always wanted to be a writer. Those must be hers.

So maybe she didn't want to be a circus showgirl; maybe she dreamed of being Katherine Anne Porter or Taylor Caldwell or her favorite author, Mazo de la Roche. And on Mother's Day, each year, I sit a moment and wonder what else it is we don't know about the sharp-tongued, irritable, meanly funny suburban matron who raised us and, if nothing else, helped ensure we all got the hell out of Dodge even if she hadn't.


The stories? Never read them. My sister got hold of the envelope, and she's her mother's daughter.

** Just realized that this year I have to move that to the past tense. Time in its flight...
Posted by Muscato at 1:41 PM