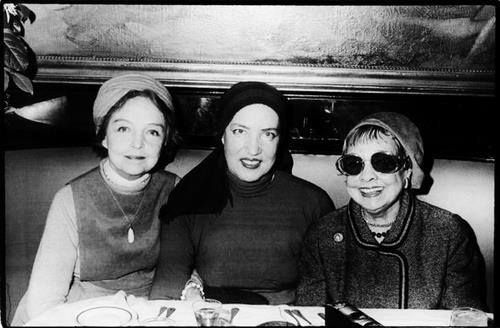 Three staunch ladies, lunching at the Russian Tea Room. What one would have given to be a fly on the wall...

In March of 1976, it seems, the redoubtable Mr. Arthur Bell hosted these three - who are, in case they do need any introduction, from left to right Miss Lillian Gish of the silent screen, Miss Edith Beale of Grey Gardens, and Miss Anita Loos of Gentlemen Preferring Blondes - and it would seem they got on like a house on fire. Gish and Loos were old friends, of course, but Little Edie fit right in, chatting away on everything from Women's Lib to the works of Irving Berlin.  It must have made for quite an afternoon.

I fell down a bit of rabbit hole this weekend, you see. I've never really been a Beale cultist (I'm ashamed to admit I've seen neither the musical nor the Barrymore-Lange TV movie), although I did see the Maylses' landmark documentary several decades ago at Film Forum, and it is a remarkable enough sort of thing that it sticks with one.  In any case, something, some random Internet* search, led me to a remarkable labor of love: Little Edie Beale, a compendium of all things Bealeianian, and really very, very charming as well as informative it is, too. If nothing else, the kind of deep dive I took leaves one with a very bittersweet admiration - even more than one might have had previously - for the complicated, often unhappy, but ultimately triumphant life that Little Edie led. I say triumphant, for one often fails to realize that, for a quarter of a century or so after the documentary cameras left her, Edie led a life that realized her many goals - from appearing on the New York cabaret stage to having the opportunity to swim every day in the ocean from her by-all-accounts tidy condo in Bal Harbour - and more or less on her own terms. We should all do so well.

I think, too, that there's far too little shouting these days about Arthur Bell, a man whose funny, acerbic, and insightful writing was a beacon to me in the days when I hoped for nothing more than to find a place in Manhattan and, through that, in the Great Wide World. Like so many in those dark days, he was taken from us far too early. The New York Times said diabetes; the date (1984), his age (44), and the location (St. Vincent's Hospital, far too familiar to far too many of us at the time) suggest otherwise.  I can't imagine a better account of a marvelous event like this lunch than his (nor, really, anyone else who would think to pull it together). If anyone is feeling terribly ambitious, apparently it's possible to approximate being a fly on the wall at the historic event, for the tape that Bell refer to in his column is now housed at the New York Public Library. I may just have to drop by the next time the chance arises.

At the very least, I suppose one drop into the resuscitated Russian Tea Room and have a little something and a blintz in honor of the dear ladies who lunched, no?

* I don't care what the news tells us; I'm going to keep spelling it with a capital "I". So there.