This Woman Was Dangerous 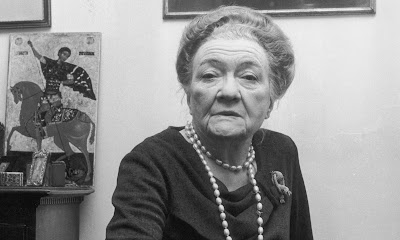 I love stumbling, unawares, onto a treasurable character; this lady most definitely was one.

She was born Maria Ignatievna Zakrevskaya in what was then part of the "All" in the "All the Russias" but is now in the Ukraine, and over the course of a long and checkered life she was variously known as the Countess von Benckendorff and, later, the Baroness von Budberg-Bönningshausen, but to her friends and (many) lovers she was always simply "Moura."

I suppose I'd heard the name - it's the kind that tends to crop up here and there in memoirs and your racier histories of the era - but I've been made a great deal more aware of her of late thanks to my current reading, the tremendously good Charmed Lives: A Family Romance.  The author, Michael Korda, brings wit and élan to his tale of being raised, in an air of equal parts complete chaos and utter refinement, by his father, Vincent Korda, and his formidable uncle, the British film magnate Sir Alex Korda.  Anyone who had Merle Oberon as an aunt would likely have had a colorful childhood; it's some testimony to Korda's rearing that that fact is just about the least interesting part of the story.

In any case, at a memorable dinner party at his uncle's opulent penthouse at Claridge's (the elder Korda was a lifelong devotee of hotels and a a sworn enemy of domesticity), the young Michael - then something like eleven - found himself handed off to the attention of the Baroness Budberg, and his recounting of his initial impressions is marvelous:

"...she was, at that point, perhaps the heaviest woman I had ever seen, though traces of her former beauty showed in her eyes, her mouth and her cheekbones. She was dressed in what looked like a black floor-length tent, with many floating panels of gauze, and carried a black beaded reticule and a gold lorgnette, through which she peered at me intensely..."

The boy is perhaps a little discomfited by her piercing attention, but she responds with sympathy:

"Never mind, my sweet, don't be nervous.  All these introductions to society are frightening, but you will get over them, trust Auntie Moura... I wll never forget how terrified I was a my own début, imagine, not like this at all, but at the Winter Palace, in front of the Czar, with that old idiot Scherbatov presenting me, and the Empress standing there like a china doll..."

So who was Moura Budberg?  Well, at this stage of her life she was a tad on her uppers and working for Sir Alex, in title as a script reader (she was a gifted linguist and translator, handy given the Korda fascination with all things Continental), but in truth as much to keep the mogul up on all the gossip and, unkinder tongues implied, to find him pretty girls (Korda's brother Zoltan referred to her as "that fraudulent Czarist procuress," which is a title for the ages).

More broadly, though, Budberg was a force of nature. She survived the Revolution (which is more than can be said for either her fortune or the Count, who was shot. She made short shrift of the Baron, too, but at least he ended up in Rio rather than dead). She toyed with every side of her country's explosive political spectrum, forsaking her memories of the Winter Palace to stay in revolutionary Petrograd as (very) private secretary to Maxim Gorky before heading to the West and eventually taking up with H.G. Wells (and reclaiming her boundless nostalgia for The Good Old Days).

She was involved in a great deal of skullduggery during and after the First War, to the point that her various dabblings in espionage later served as the basis for a Kay Francis film, British Agent, although it's clear that her agentry was not entirely in the service of his Britannic majesty - she was feeding information back to Moscow for at least a decade after she decamped, and she visited the Soviet Union several times in subsequent years. Her first biography, in Russian, was called The Iron Woman - apparently something Gorky called her, and its translation - which I'll clearly have to find - is Budberg: The Dangerous Life of the Baroness Budberg.

By the time the Michael Korda knew her, she was a kind of louche institution:

"Moura was said to be the most intelligent owman in Europe... No book, article, or poem was published anywhere that she had not read, heard about, or met the author of, and her admirers, aside from Gorky and Wells, included Churchill, Bruce Lockhart (the famous British spy whose life she had saved during the Revolution), W. Somerset Maugham, Graham Greene, Stalin, Gabriele D'Annunzio and almost everyone else of any literary, social or political consequence. She arranged marriages, covered love affairs, kept secrets, and served as a kind of one-woman PEN Club."

Before we leave her, I hope you'll indulge one more quote. Korda gets right at the heart of what keeps entirely impossible people like Moura from driving one quite mad:

"Like an old warhorse, Moura pulled herself together for parties, however tired or ill she might feel, and was always brilliant, witty and ribald, her deep, knowing, Falstaffian laughter echoing through the room and marking her presence before one had even seen her. Her role in life was to amuse and entertain Alex, and to survive... 'If ever I become sick, or start to complain, I will be just another old woman, and who will want me then?'"

I think she sounds simply marvelous and I'm sure that - in limited doses - she was a hoot.  If nothing else, who else can you think of who won the heart of both Stalin and, of all people, that matchless old snob Somerset Maugham?
Posted by Muscato at 2:56 PM