The Marriage of True Minds 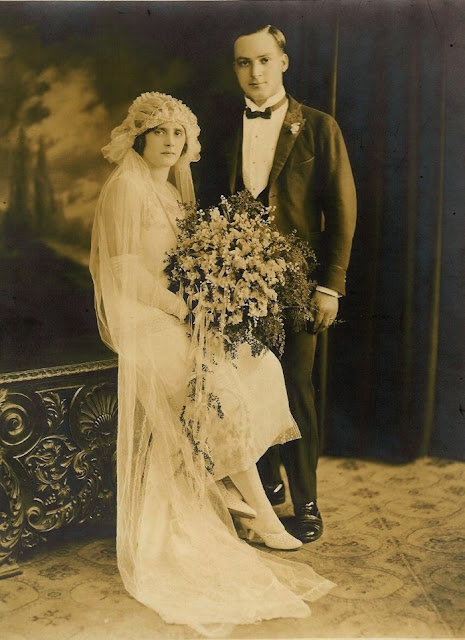 Because I have a useless mind, one that retains bits and pieces from the distant past, but not, unfortunately, vital information put before it yesterday, I can tell you that today would have been my paternal grandparents' 95th wedding anniversary.  This happy couple, I should note, is not they, but it might as well have been, for isn't there something almost wholly interchangeable about most wedding pictures?

Even, as with '20s weddings, when the fashions seem to us especially dated, there is still that air, a palpable atmosphere combining tension, happiness, and a sense of wondering how it will all turn out.

In their case, by almost any measure, things turned out very well indeed.  The sun shone on their August wedding, the families were all in favor, despite - and this was unusual in our small city - having been previously unacquainted, and their modest wedding trip (to Cleveland, then the big city one state over rather than a punchline) was uneventul.  They took a lake steamer to return, adding a few extra days of time away, and on their return lived for a time with the groom's parents while finishing touches were put on the square white clapboard house in which they would spend the next 67 years.

You read that right: 68 years married, 67 in that same house.  Can you imagine?  When I was a child, the grandfather clock that ticked in that hall bad been put there in the Wilson administration and was moved only in 1971, when the old faded wallpaper at last had to be replaced.  It went back of course, and sounded the quarter-hours from its post for nearly two more decades (it does the same today in My Dear Sister's bohemian Boston front parlor).  Such stability seems unimaginable, and the grandparents' whole existence was similarly rock-solid, an unbroken round of filling meals, sedate social events, church committees and service to the boards of various charitable organizations, an annual winter pilgrimage somewhere warmer (Sanibel being a great favorite), and only the slightest alteration made to acknowledge alarums or excursions ranging from the Second War to the departure from our hometown of almost all the younger relatives.

By the end they seemed as immutable as time itself, and a family joke was that when the apocalypse came, the last of Earth would be a tiny chunk spinning out into the galaxies, containing only that foursquare house - Alice (a Treasure) in the kitchen fretting about the potatoes (for 40 years she lived in fear of undercooking them, and never did) and the grandparents on the porch, surveying from their accustomed chairs the End of Days with the same compsosure that they did the generations of children who played down the middle of their quiet street.

"I suppose," Grandfather would observe, "This means we won't be putting up the storm windows come Labor Day..."

We'll hit 12 years, the Mister and I, in a couple of days, and I don't suppose we'll soldier on for anything like another 56.  Still, it gives one something to look forward to, and if we don't have our own eternal porch, or, alas, our own Treasure in the kitchen - still, I like to think we have, in our own way, more than a measure of that seven-decade bond.
Posted by Muscato at 4:22 PM

Email ThisBlogThis!Share to TwitterShare to FacebookShare to Pinterest
Labels: Marriage, Memories, On This Day