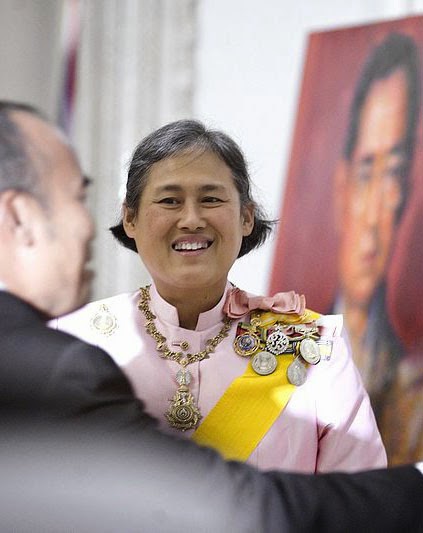 I have a new girl-crush, of a most unlikely nature, but I really am entranced.  She's a fixture, you see, of the news in Bangkok, and since I spent so much time during this trip sitting in a stupor in the hotel room that I saw rather a lot of her.  Such, however, are the local lèse-majesté laws that I thought it wiser to write about her only when safely elsewhere.

Admittedly, it's hard to imagine a more unlikely angel.  Thai royalty, even more than its Western counterparts, is image-obsessed, and Bangkok is liberally studded with vast and ambitiously touched-up portraits of the King (currently in his late 80s) and Queen (not all that far behind him) in which they rarely look more than a highly maintained 37.  The next generation of royals are, by and large, so severely chemically/cosmetically/surgically enhanced that they look less like people than special limited-edition versions of a Kardashian Bratz Geisha doll.  But then there's Sirindhorn.

In contrast to her lacquered, at times almost robotic relatives (simultaneously seeming quasi-anesthetized and on the verge of hysteria, no easy feat), the Angel Princess (her formal title, Princess Maha Chakri Sirindhorn, is more or less the equivalent of the British Princess Royal) is nothing if not natural.  She is a frankly stout, moderately toothy maiden lady of a certain age, with a short-cropped head of unruly graying hair and a penchant for sensible tweeds.  She has a presence of resolute, almost surreal artlessness, a smile that wavers between nervous and beatific, and a penchant for two things: 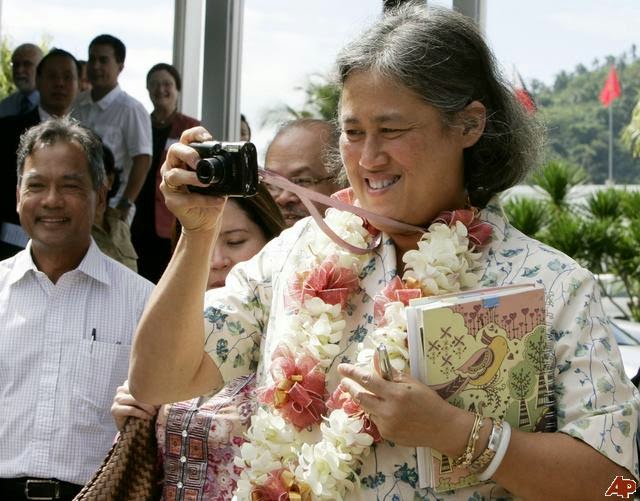 (1) snapping pictures at not particularly opportune moments in the midst of her public appearances, and: 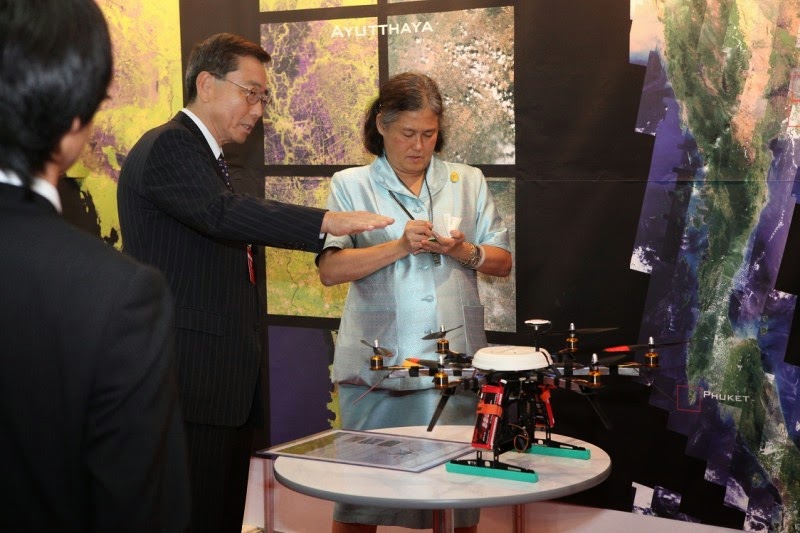 (2) taking copious notes at any available opportunity.  One can only wonder at the sheer volume of little spiral-bound notebooks she must have amassed over the years (note that she's holding one even as she takes her snap up above).

In short, she's the kind of enthusiastic and unsubtle personage that Grandmother Muscato would have referred to as a "great galumphing girl," and absolutely un-self-conscious in a way that I suppose one can only be when raised a princess in a more or less semi-divine monarchy.  For, however informal she may seem to be, the Princess moves nonetheless through surroundings of comic-opera Habsburgische protocol - something that only heightens the contrast with her own awkwardly endearing presence. 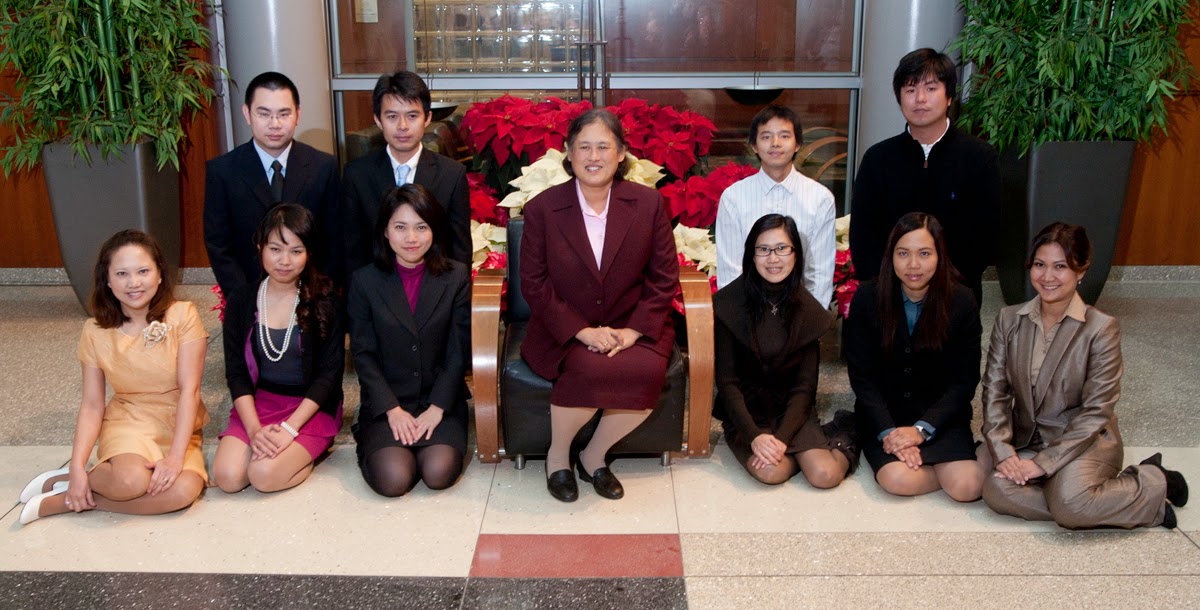 I noticed her first on this trip during an extended news segment in which she undertook that staple of royal appearances everywhere, opening a hospital ward.  While I know that there's a great deal of hoop-ti-doo about all such visits, I doubt that Princess Alexandra or even the Queen herself regularly have to deal with crowds of people advancing toward them on all fours, but such is the situation in Thailand.  One approaches the royal person, you see, in a kind of serpentine, kow-towing crawl, a circumstance that Sirindhorn seems to do her best to take in stride in a jolly way that's almost convincing.  In the presence of her imperious mother, Queen Sirikit, or any of her reptilian siblings, this might seem degrading; with the AP on hand, though, it feels more like a community-theatre rehearsal for a scene in The King and I, with she herself the jovial gym-teacher-turned-director. 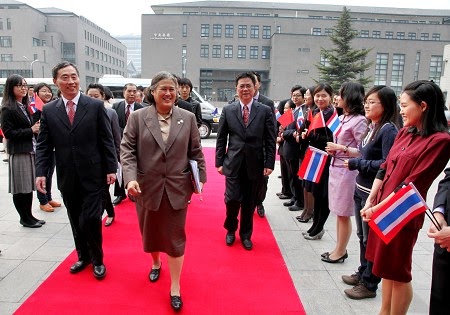 In her domestic appearances, she strives for a minimum (in her dressy mother's eyes, I'm sure the very barest of minimums) of royal-lady outfitting (if rarely an iota of makeup), but overseas (seen here in, I believe, a Chinese outing) she practically goes full-bore Gertrude Stein.  She might as well be wielding a field-hockey stick, don't you think?

Paradoxically, her eccentrically quotidian affect has made her - even in appearance-mad Thailand - by far the most popular member of her family, and certainly the only really popular one aside from her remote, unworldly parents. 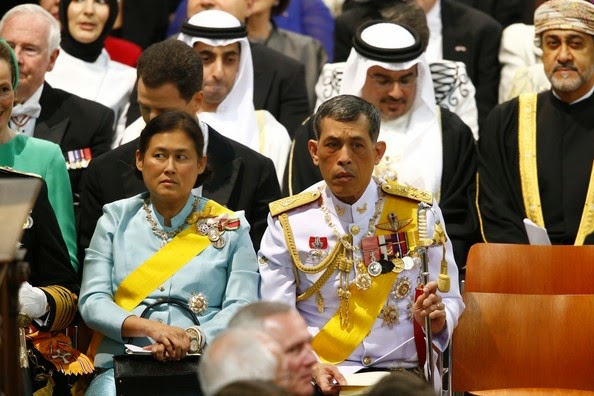 She looks all the better next to her big brother, HRH The Crown Prince Maha Vajiralongkorn, who is regularly (and with a fair amount of justification) portrayed as the villain of the piece, a licentious, corrupt, and generally iffy piece of work.  They went to the inauguration of the new Dutch King* together, and you can just see how happy she is to be seen in public with him.  He's the heir, technically, but more and more one hears rumblings about whether it's not time for a Siamese queen regnant, something apparently murky constitutionally but not beyond the realm of possibility.  Time will tell.

While I was in Bangkok, the public was for a few days deprived of her presence (she was off on a five-day state visit to Malta, and can one imagine a more Ruritanian undertaking for a Princess Royal?), and the news was the duller for it.  Even with the crawling, and the snaps, and the notes, she's pretty entrancing, and while she may make her coeval Princess Anne look like a model of dainty chic, one can see why she has the heart of her nation in her stubby little hands.

* The tall gentleman in the turban and Mona Lisa smile top right is a cousin of the Sultan of Oman, regularly deputed to represent at international events; I met him several times while out in the Sandlands.  He's charming, but he's no Maha Chakri...
Posted by Muscato at 10:34 PM