What's My Wednesday #2: Now on Thursday!


The birthday celebrations may have thrown me off my rhythm, but I didn't want to deprive you of this week's quick glimpse into a more elegant past...

Yes, it's Miss Ginger Rogers, well into her Way Too Gracious phase, not quite stumping the panel with her endearing croak.  I don't know about you, but I had no idea at all that she was cousins with Mrs. Bennett Cerf.  Their mothers were sisters.  Quelle small world, no?

As for the film she's flogging, well I'm afraid Twist of Fate isn't quite Follow the Fleet in terms of everybody's favorite Ginger picture.  From the sole clip available on YouTube, it's also not exactly a lost masterpiece.  The "French Star" who was her co-star, Jacques Bergerac, was the fourth Mr. Ginger Rogers, 26 to her 42 when they married.   He was not without a certain quelquechose... 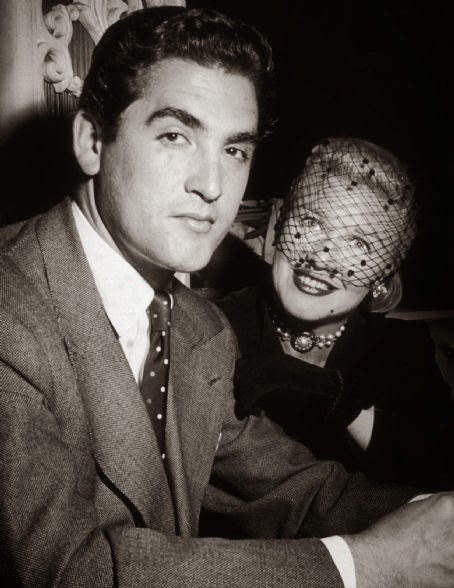 The happy couple.  Look at her expression; for that matter, look at his.  Together, they
give every impression that ol' Jacques may have been a rather gifted sort of gentleman, no?

If you're wondering whose idea it was to turn a Paris lawyer into a Hollywood hunk, and just who paid for the UK filming of Twist of Fate, all I can say is that if your guess is that her initials were G.R., you'd not be far wrong.

Ginger Rogers is someone who found a very specific kind of Hollywood immortality, one centered on her work over a decade or so, from 42nd Street to Roxie Hart, and there's a level on which it's kinder to ignore most of what came after.  But here, at least, wearing her odd evening coat and preening for a national audience, for a moment on a fine November 1954 Manhattan Sunday evening, she looks pleased as punch with her life, so at least she got some fun out of it all.

Within a couple of years it was all over for the Rogers-Bergeracs; he moved on to Dorothy Malone, and she eventually found herself a fifth, a producer.  Ginger didn't have much better luck with men than she did with her later pictures, sadly, but I can forgive her a lot.  She's like the little girl who had a little curl - when she was good, she was, we should remember, very, very good...
Posted by Muscato at 7:45 PM