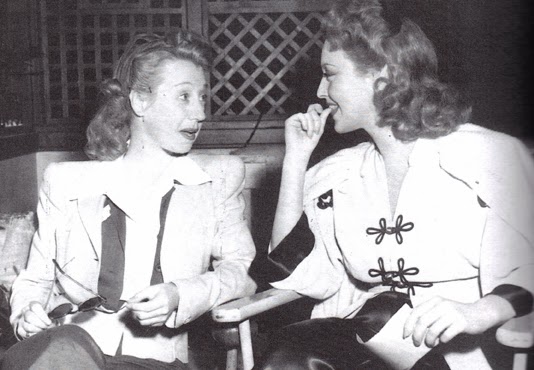 Sometimes I'm startled by my own ignorance...

Am I the only person around who didn't know that Grandmama on The Addams Family was Jeannette MacDonald's big sister?  The two are seen here on the set of Jeannette's 1942 epic Cairo.  At that time the future TV ghoul was a moderately successful character actress and bit-part player under the name Marie Blake (not the cabaret singer of sainted memory, of course).  She was born Edith Marie Blossom, and she ended her career using her real married name, Blossom Rock.

The two were apparently devoted, although Marie/Blossom's film career never got much beyond "Woman Helping to Look for Ring (uncredited)" and ""Hilda, the maid" (that was kind of a theme for her - her last two movie roles were "Servant (uncredited)" and "Cleaning Woman").  Still, she was in some interesting pictures, from an Andy Hardy entry to The Snake Pit to Roz Russell's Mourning Becomes Electra, and because of her last hurrah as the Addams's demented matriarch, she's probably more familiar to a large swathe of modern audiences than her once pre-eminent sister.

If nothing else, it's nice to know that not every Hollywood sibling relationship was characterized by a Fontaine-de Havilland level of acrimony, no?
Posted by Muscato at 10:05 AM