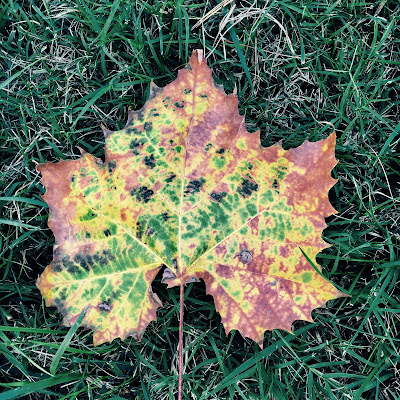 Behold: the exception that proves the rule...

Because, you see the leaves seem noticeably reluctant to change this year; one almost wonders if they know something about the coming winter that we don't, yet. For whatever reason - the generally warmer than one might expect weather, or the dry spell we've been going through, or just general cussedness, with the odd exception and some general thinning of the foliage, it might as well be August.

This seems to me a particular shame - or rather, the warmer weather does, to be specific - as I'm in general a great fan of fall clothes. This betwixt-and-between has meant putting off getting out the sweaters and scarves, or when one does wear them, a great deal of putting-on and pulling-off, which is neither convenient nor especially decorative. I don't really mind the hot, sunny afternoons,  mind you, and I'll likely gripe just as much once they're gone, but for the moment I'd just like to go out in one set of clothes and keep them on until it's actually time (and place) to change.

And on the whole, that's really the sort of week it's been - dull and focused on minutiae. When the biggest thing that's happened (after Arlene Francis's birthday, of course) is that you've discovered that some marvelous soul has created a Twitter account that does nothing but post paintings by Caillebotte, it's probably not a stretch to say that one's life could use an infusion of oomph. I don't see much of that on the horizon at the moment, but I'm keeping my eyes open. And in the meantime, I'm hoping that there will be more leaves, and of brighter colors, to photograph..

Is your autumn proving any more diverting than mine? It would be a pleasure to know just what you're up to...
Posted by Muscato at 10:18 AM