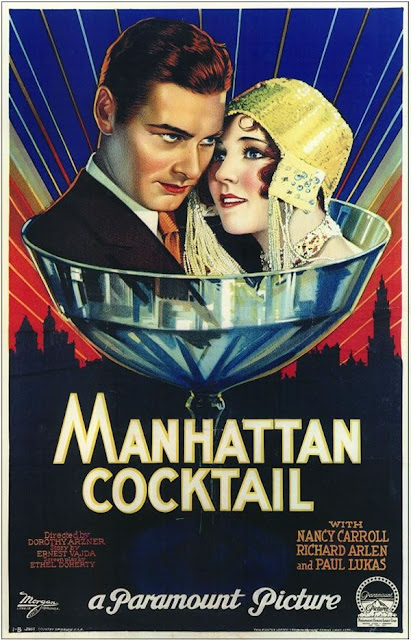 I don't know about you, but I think that sounds like a perfectly capital idea...

Not so much a Manhattan, specifically, I think (which has never really been a particular favorite; I'm a vodka boy, when not quaffing something bubbly); rather, the more general notion of a cocktail (or two) in Manhattan.

In short, I'm contemplating a brief escape, and trying to determine whether or not it's practicable.

This is rather more a dilemma than the usual weekend minibreak (such a useful expression, and one I'd never heard of before encountering Bridget Jones - in the original columns, thank you very much, ages before Renee Zellweger was a twinkling in some casting director's eye) might be, because, you see, I'm exceedingly tempted to race up to the Big City on my own. Solo. Sans the Mister.

Oh, now, don't get all het up; it's not like I'm answering the siren song of some sex-app lothario, not at all. It's just that Himself generally works weekends, and there are at the moment a number of exceedingly appealing museum shows I want to see, and that's not especially his cup of tea. Also, I'm a freak of nature in that, having lived there for so long, I truly like New York in August, despite the heat and tourists and general flight of sensible people to one or another Hampton or the outer fringes of the Island of Fire.

It's just that I'm not quite sure how to put it to him.... "Oh, Darling, I've been meaning to tell you - I'm going to run away and spend our money on Florine Stettheimer postcards and whatever is on at TKTS. Have fun walking the dog after your twelve-hour shift on Saturday!"

I don't see that going down particularly well, however indulgent the Dear Boy is (even if, as I plan to, I once more enlist the services of Zach the hipster dog-walker, who was so very helpful a couple of years ago when I was laid up).

But I really do want to see the Stettheimer show, and see what's going on at the Met, and decide whether or not I approve of what they've done to the Whitney, and while I'll be too late for a last frozen strawberry Daiquiri at the poor old Riviera Café (which I do believe was the first place I ever had a frozen drink, all those decades ago) now that it's closing, I want to stave off the possibility of not seeing one or two other favorite places before they, too, vanish. It's not like I'd be staying at the Pierre or anything too extravagant, and if I saw one or two old friends and had a little excursion here or there (is it really possible that Marie's Crisis hasn't closed yet? And do you think there's anyone worth hearing at some low boîte?), would that really be so awful and unforgivable?

I suppose I should clarify that I'm entirely, as it were, en-guilting myself, as I do believe that the Mister would be more than sensible about it all. But it does seem like poor sport abandoning him on a fine summer weekend and....

Oh, but what fun to take the train (is it running these days? Would I have to settle for one of those appalling buses one always sees broken down on the Jersey Turnpike?)... and have a nice dinner at Tout Va Bien... and walk in the Park...