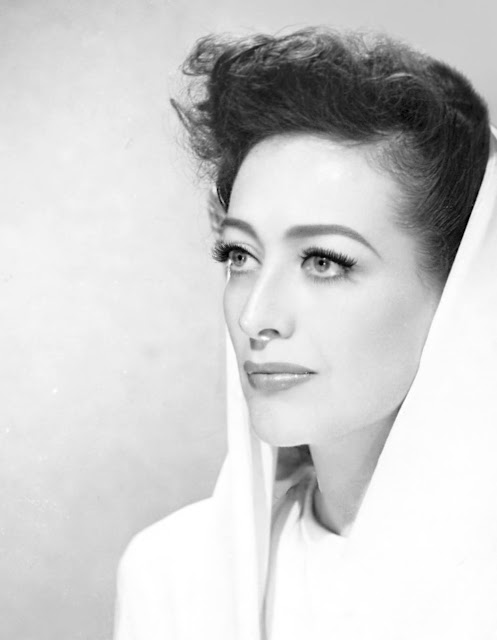 A moment with The Greatest Star, just because.

This flashed across the Facebooks last week and, as happens occasionally, my first thought was "That's not in Four Fabulous Faces!" Turns out the slightly off-kilter framing is a hint as to why this unusual but I think quite beautiful shot isn't better known, in that it's actually cropped from a trio portrait with Greer Garson and Robert Taylor for When Ladies Meet (here's another from the same session). Still, I think it stands on its own rather nicely.

I'm taken with her clear-eyed gaze into the middle distance, an affect I frequently have to (attempt to) maintain whilst interviewing job candidates who are eager to assure me of their unique skills and abilities, without which they are touchingly certain that Golden Handcuffs will be unable to function in any way whatsoever.

I'm pretty much Team Joan in most debates, but in later years I do miss the relative restraint that Metro imposed on Crawford's tendency to exaggerate her (already remarkable) features. Here the caterpillar brows are in their infancy and the lipline still shows a nod toward reality, and the overall balance of her face is the better for it.