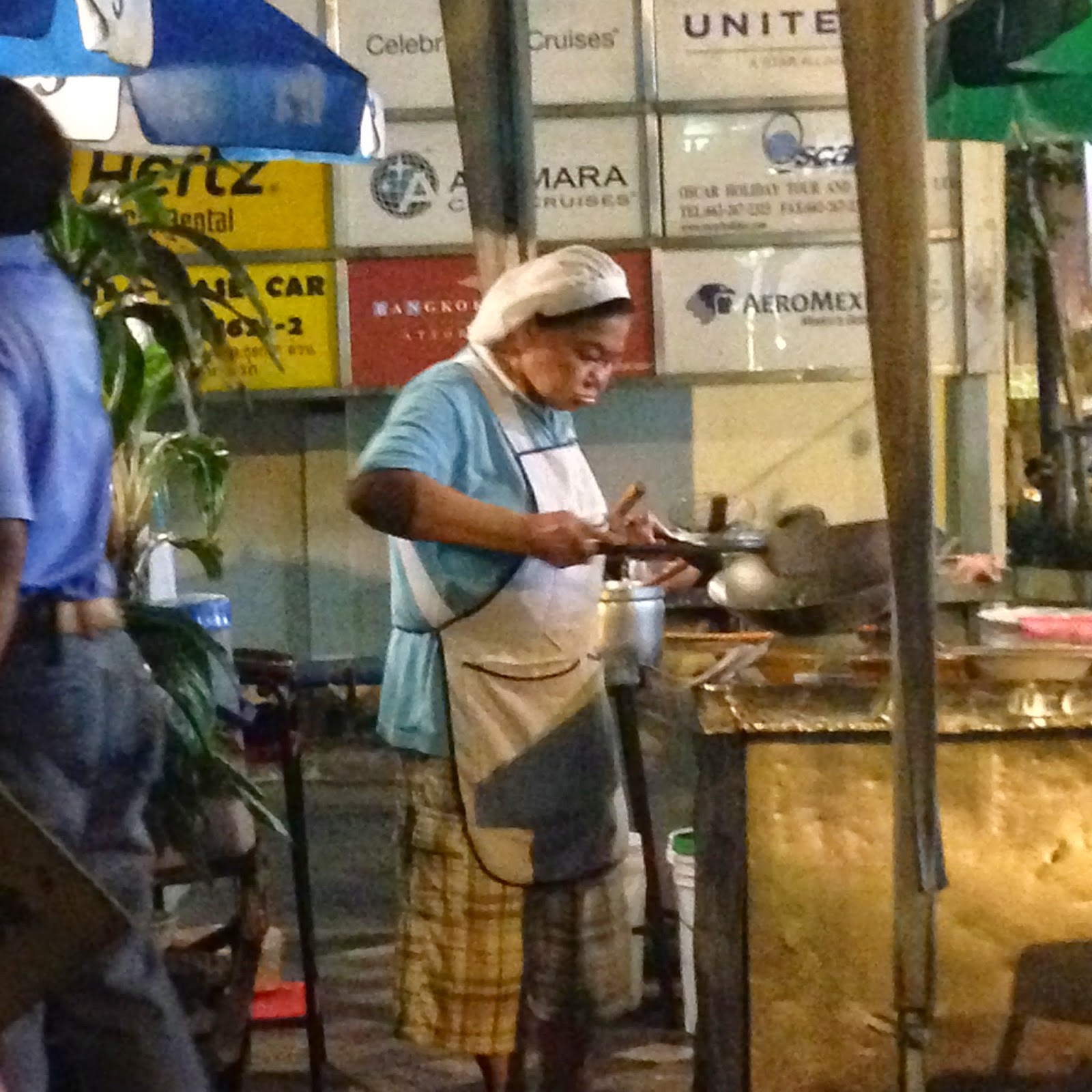 You know I'm not one for hyperbole, darlings (stop snickering), but this woman is something of a genius.

I should say that I know nothing at all about her except what she does, but what she does is pretty amazing.  She is the cook - and the sole one, no sous-chefs, prep cooks, line help, you name it, not for her - at a sidewalk restaurant on a busy street in Bangkok.  Armed with nothing much more than her woks and a formidable array of knives, she rules with total dominion over what can only in the sketchiest terms be called a kitchen (an array of battered carts and piles of crates), turning out food of the most wonderful variety and excellence, from a crab fried-rice that would melt the coldest heart to seafood curries that burn with a slow and glorious fire, and a great deal more on top of that (I'll be having dreams of that mango with sticky rice for a very long time).

And this is no tiny operation, either - its premises spread up the steps and front terrace of a bank, closed by night, with tables and chairs that fill every inch, appearing at closing time and stored away so that, come morning, there's no trace of the place.  A small but disciplined army of waiters provides service that would shame more than a few Zagat stars I could mention, tolerantly managing the tables of spice-terrified farang and ensuring that regulars (the friends who took me there included) get their beer cold (and even so, Bangkok-style, served with ice - not something I can quite get my mind around) and their food hot.  All around is the chaos of the city, roaring traffic and blaring music from the not-so-far-away dives where unspeakable goings-on take place (three shows nitely, two-drink minimum, not that I'd know anything about that, of course), but away she works, from sunset late into the night, as impassive and unhurried as a temple Buddha.  Sort of puts things in perspective, somehow.

Which is probably something I need.  Oh, I'm home, after another exceedingly lengthy journey, and as seems to be becoming the expected thing, I'm apparently heading into another onslaught of sinus and throat misery. Of the trip, all I'll say is that if you ever find yourself making the long run out to Asia and back and have someone running your life with greater mercy (not to mention common sense) than the evil trolls that staff the travel office of Golden Handcuffs Consulting Amalgamated International, let me tell you one key thing:  do not fly Delta.  I'll spare you the miserable details, but let's just say I had plenty of time to rue the days of yore, when as amanuensis to various of the Great and Good I flew at the right end of the aircraft.

So I'm peevish and jetlagged and probably not really that good company.  I'll just leave you with one more Thai vignette before the final collapse sets in: 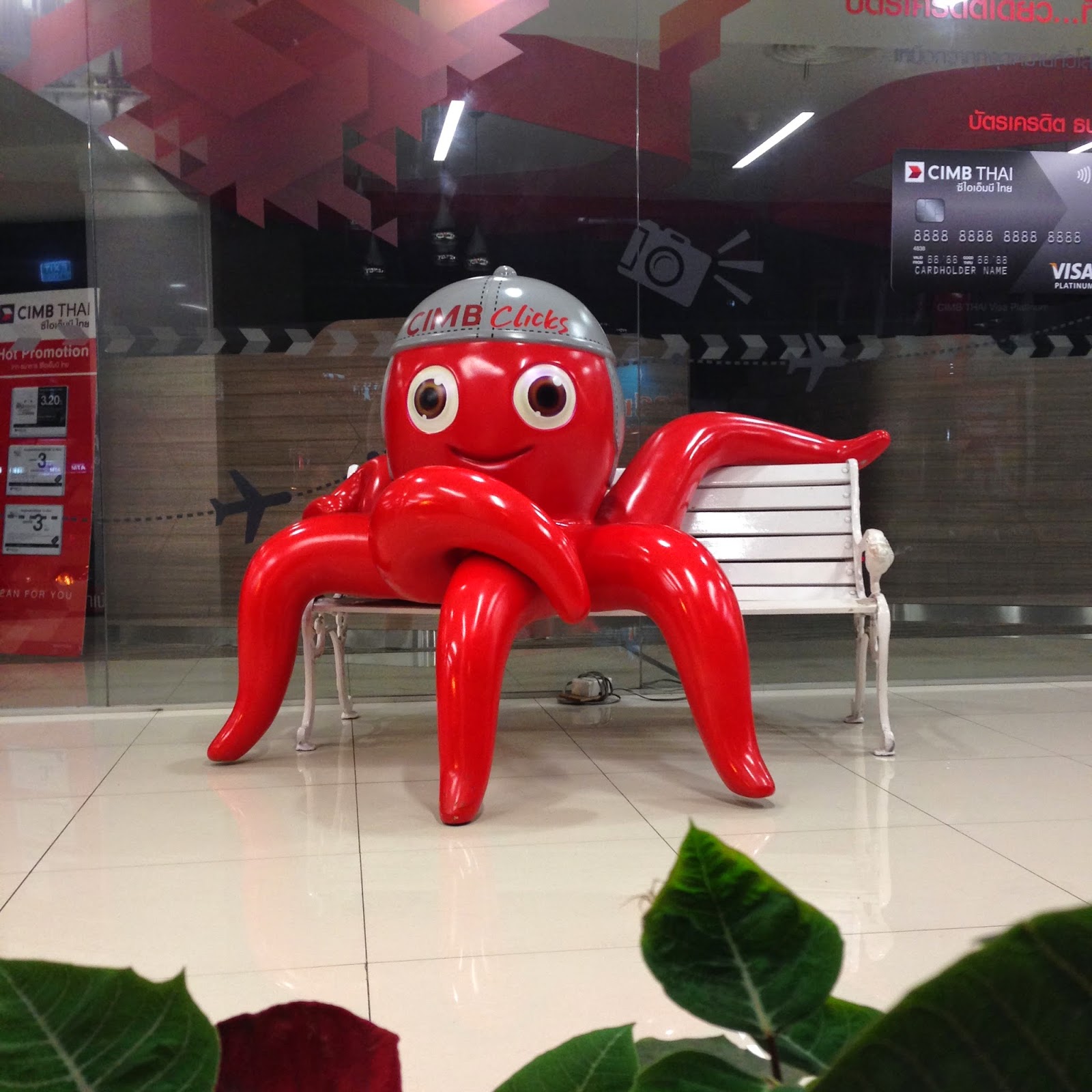 Not quite another entry in my "I'm so happy to be food!" sculpture collection, but I found him pretty endearing even so.  He is apparently the mascot of the bank in front of which he's so insouciantly lounging, but just what Crab Clicks are,* I can't imagine.  Perhaps I should have asked the cook to fry some up...

* Or why, for that matter, he's sporting a Harding-era football helmet.
Posted by Muscato at 9:38 PM