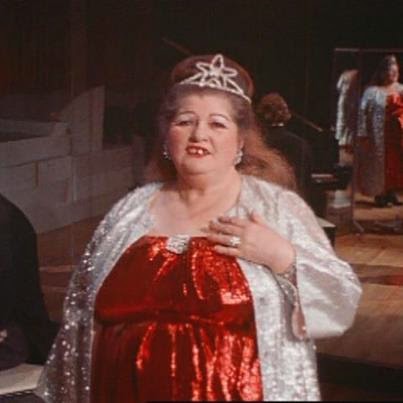 Exciting news from Bangkok, kids!  Of course, the above regal creature is not our emerging Café obsession, HRH The Princess Maha Chakri Sirindhorn (aka the Angel Princess), but instead the rather more, um, down to earth late film sensation Edith Massy, aka Edie the Egg Lady.

But Edie in a tiara makes a little more sense - well, in my fevered brain, at least - in light of this fascinating news tidbit from the Thai state news agency.  I'd try and summarize for you, but I think it's important to read this breaking story in its entirety:


Thailand to organize first ever World Egg Day
BANGKOK, 30 September 2014 (NNT) - The Ministry of Agriculture and Cooperatives will organize the World Egg Day for the first time in Thailand to encourage Thai people to eat chicken eggs according to sex and age. The event is scheduled for 10-14 October in Bangkok.

Inspector of the Ministry of Agriculture and Cooperatives Nirandon Euangtrakunsuk said the Livestock Development Department cooperated with egg farmers and vendors in arranging the World Egg Day. The event was inspired by the Egg Board’s goal to increase the national egg consumption from 200 eggs/person to 300 eggs/person by the year 2018.

The total amount of eggs in the market is expected to be 39.2 million in October, higher than the current amount of 38.8 million. It is therefore necessary for the ministry to increase the national egg consumption so that it is in balance with the increasing egg supply.

The World Egg Day event will take place next month at Siam Square One under the theme “Thai children love eggs.” There will be an exhibition on eggs and egg giveaways. Copies of the “Sun Egg” recipe by Her Royal Highness Princess Maha Chakri Sirindhorn will be handed out to the event’s participants.

Now, I'm just going to leave aside the enigmatic issue of promoting egg-eating "according to sex and age."  Similarly, I'm not really concerned with the no doubt complex processes involved in balancing an entire country's egg supply and egg consumption.

No, what I'm taken by - frustrated by, really, to be frank - is that there's only such passing, tantalizing reference to our Princess's involvement in the festivities.  It's all so unclear - will she actually grace any element of World Egg Day, Thailand-edition with her genial presence?  Will she personally hand out some copies of her "Sun Egg" recipe?  Is there any chance, do you suppose, that she will actually demonstrate this mysterious concoction?  What do you suppose could be the royal secret to successful Sun Eggs, anyway?

But wait - Google comes to our rescue!  No need to wait for World Egg Day, nor to be in Bangkok to receive the recipe directly from the Angel Princess.  It turns out that HRH's very own Sun Egg recipe is already available online, and you can check it out here, complete with (Thai-language) illustrative video (sadly sans Princess).  In Thai it's called Khai Phra Arthit, and it would seem that according to the Princess, it owes its name to her royal father's belief that the finished dish looks like the surface of the sun.  That I don't know about, but it does look tasty enough (if also more than a little like a one-dish equivalent of Egg Fu Yung).

Anybody up to try out the recipe and let us know how it turns out?  In a perfect world, I'd ask for a video report filmed live in a playpen, while the on-camera talent is wearing only a bra and girdle, but I suppose that's too much to ask for.  In the meantime, I'll console myself with some wisdom from the film starring the original Egg Lady:  "Chickens are plentiful, mama!"