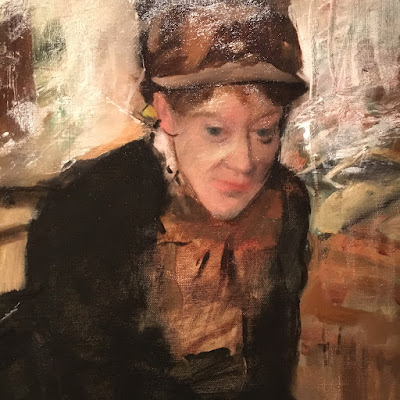 So this week has featured a houseguest, and at the moment, I feel nearly as weary as poor Miss Mary Cassatt here...

Yes, we were descended upon on Tuesday by one of the more... energetic of our dear pals from Sandlands days, an Egyptian of boundless enthusiasm and verve. I'm exhausted.

But we've been having great fun, and after all the mixed emotions of last week's family hejira, it's been a tonic to have basically a Middle Eastern version of Tigger bouncing around the house.  Yesterday, I took the afternoon off and we hit the National Portrait Gallery (our guest being among things an artist himself).

I'd never noticed this rather lovely portrait of Miss Cassatt, by Degas, before. Back in my art-historical days, I once had a professor who described Mary Cassatt as "the patron saint of the not-pretty" for her sympathetic and engaging pictures of ordinary women. Here I think the French master has done something of the same for his fellow artist, for while his Cassatt is far from his usual lithe dancers or saucy bar-girls, there is something lovely and sensitive in her face, as well as a wry intelligence that one doesn't always note in the ballerinas and their ilk.

And then later I was led on something I've not done for yonks, a genuine bar crawl, as it turns out that Our Nation's Capital has suddenly developed a spate of tiny but not-unamusing little boîtes aimed at the Confirmed Bachelor and their admirers. The evening was lovely and the roof decks very pleasant indeed, as well our excellent dinner at a new-to-me little bistro with a nice patio and marvelous Brussels sprouts (something that is still, after more than a year of eating vegetables and rather to my surprise, not a contradiction in terms). Sometimes having an out-of-towner to tow one around can be a reminder that there are worse things than one's own stomping grounds on a fine Friday evening.

And today will be more of the same. He's staying 'til Tuesday, and after that I may not move until after Labor Day...
Posted by Muscato at 9:33 AM