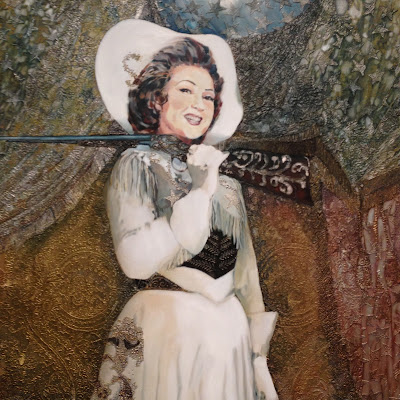 I had a nice long stroll around Our Nation's Capital yesterday, and I grabbed the opportunity to drop into the National Portrait Gallery and pay my respects to some old familiar faces.

Merman, quite appropriately, anchors the Gallery's collection of American entertainers and performing artists, doing so with the same nonchalant panache that was her hallmark for six decades on the stage.  I first saw Rosemarie Sloat's bravura painting - the only life portrait for which the Merm ever sat - on a visit to Washington not long after the lady herself departed for the theatres of Fabulon, when it hung in a place of honor at the main entrance.  I stood there looking when up wandered a matronly pair of gallery-goers. They approached and stood for a bit, joining me in appreciating Annie with her Gun up on the wall.

After a long pause, one leaned over and said, "Excuse me, but I have to ask - are you a relative?"

I made a surprised denial, and the lady peered at me closer. "I was just wondering. You have her eyes."

Which I think is a distinct compliment; at least, I've long decided to take it as one. 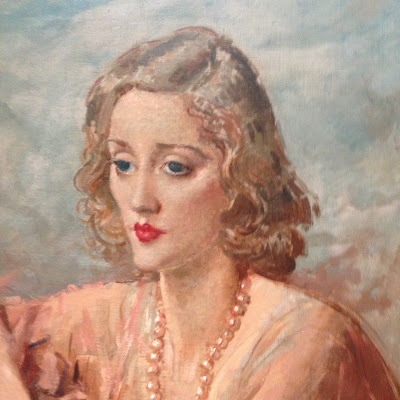 Not far off hangs another lady of the stage - who faced some of the challenges on film as her singing sister, neither of whom really translated entirely satisfactorily to celluloid - Miss Bankhead.  This portrait by Augustus John was perhaps her most treasured possession.  It was a reminder to her, I've often thought, in bad times (of which, in later years, she had her share) that once she'd been the toast of London, a glittering beacon for the Bright Young Things as well as the enthralled shopgirls who notoriously thronged the upper tiers of the West End theatres in which she enjoyed unparalleled success for an American girl.  However raucous, coarse, and, in the end, rather pitiable she became, it was John's image of her that lingered in at least her own mind.  Among other things, she could never abide her nose, a feature that the portraitist made for her sake classically perfect. 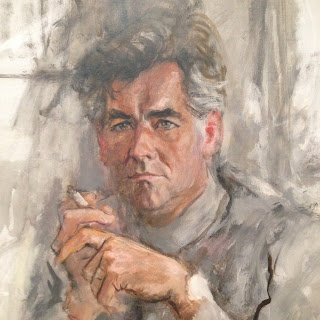 This is a picture I can never get used to in its current setting, a few frames away from the two above ladies, with both of whom he was acquainted.  When I first saw René Boucher's misty (or is it smoky?) portrait of Leonard Bernstein, it hung over the piano between the high windows that looked out at Central Park from the Dakota.  There it looked both larger and more at home.  Boucher has long been dismissed as a society painter, and while that's an appellation and a genre for which I normally have great affection, I don't think he'll ever take the place of Boldini or dear M. de László in my regard.  This is a perfectly fine portrait, I suppose, but it doesn't do much to capture the Maestro's very particular energy and charisma; he's been prettified, which is something of which he of all people had no need at all. 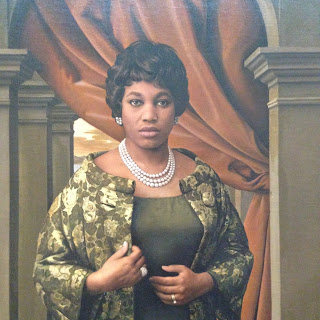 Here's another friend of Bernstein's, a great lady of whom it's a pleasant surprise to remember that she's still with us.  Leontyne Price is one of the leading arguments I can think of for the United States to have some kind of system of titles; who else more deserves to be a dame? Artist Bradley Phillips gives the diva a Renaissance setting in which she seems quite entirely at home.  I can only hope that this is not in fact the green dress of hers about which the Maestro once recounted to me a highly scabrous remark that for a short while (quite deservedly) threatened their longstanding mutual affection.  If you want to feel immediately, gloriously better, go right now and listen to her sing "Vissi d'arte" (in yet another green gown; she must have thought the color flattering, whatever Bernstein believed).  But do come back. 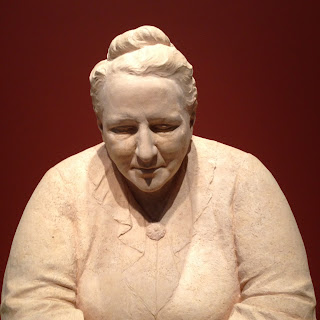 I find it frustrating to photograph Jo Davidson's Buddhaische Gertrude Stein and have never done so successfully.  She always comes off as gloomy, if not downright grumpy.  In reality the piece has a marvelous presence and serenity that recalls to me Alice B. Toklas's description of their first meeting:

"She was a golden brown presence, burned by the Tuscan sun and with a golden glint in her warm brown hair. She was dressed in a warm brown corduroy suit. She wore a large round coral brooch and when she talked, very little, or laughed, a good deal, I thought her voice came from this brooch. It was unlike anyone else’s voice — deep, full, velvety, like a great contralto’s, like two voices."

Has their ever been a more concise way, without coming right out and saying so, of writing about love at first sight? 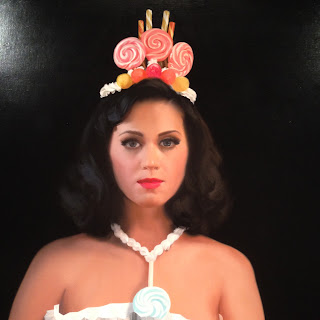 I think I even came away, after luxuriating with all the old friends, having made a new one.  Will Cotton's "Cupcake Katy" isn't, at least yet, definitely on permanent exhibition like the preceding luminaries, but whether or not eventually Miss Perry makes the grade, as a painting this charming confection can certainly hold its own in the collection. Currently it's a strong moment in one of the Gallery's typically uneven special exhibitions, this one focusing on pop celebrity (to the point that the show is even called "Eye Pop").  She gazes out with a sly solemnity that shows - here as she manages to do in her performances - that she's pretty much completely in on the joke; I like that about her.

As for the rest of my day, well, children, it was vigorous.  I started by resolving a long-running saga.  Remember that hair of mine?  Well, it's gone.  Or nearly so, cropped back to a becoming (if I say so myself) 'do that leaves a little fringe to droop over the forehead but which is deliciously cool and airy at the back.  Then it was off to a traditional barber (my frou-frou coiffeuriste having nothing so barbaric on hand as a razor, it turns out) for my first-in-ages professional shave, my ragtag beard turned into a very tidy goatee.  There are few greater luxuries than a mutiple-hot-towel shave, and by the time that was over, I was ready for a hearty lunch, which I found not from the Portraits in a moody paneled spot that serves good rosé and a better filet.  Excellent fuel for museum-going, as well as for what followed, a foray into retail and the really rather exhilarating experience of buying new - and much smaller - clothes.

The good gentlemen at Brooks Brothers were exceedingly helpful, but it was at Thomas Pink that I lost my heart to some vivid neckties and a silly summer blazer.  I think I'm going to like being (comparatively) svelte.  I'll never be a dandy à la our dear TJB, but it's nice to think at least it's becoming less and less likely that the Maestro would say something stinging about my wardrobe...
Posted by Muscato at 9:11 AM