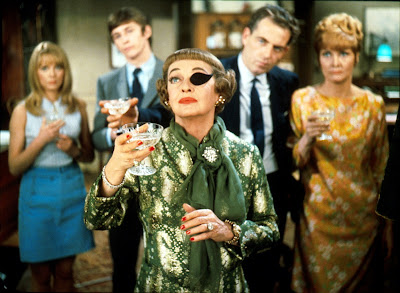 It occured to me recently that I've been remiss, having let slip a (semi)significant date: in late April, the Café celebrated its first birthday. I let that one go, since another (semi)landmark was in the works, the thousandth post. Then that one went by as well, but since here it is Thursday morning and I have a moment, a thought or two on this whole experience.

I started blogging one fine April day only because Thom, damn his eyes, suddenly no longer allowed one to join in the fun on Fabulon without registering, which created a Google ID, which, I discovered, created the possibility of making a blog. I'd never played with Blogger before, and it seemed kind of fun. Thinking I'd at least leave a placeholder, I clicked around and finally wrote this, under the headline "Why?", never thinking it would go much further:

Because I said so. Because I blame it on the summer night...or the bossa nova. Because that's just the way the cookie crumbles. Because it's always something.

Why? Why the strange fascination with the films of Kay Francis? With the minutiae of forgotten mitteleuropean dynasties of the 19th century? With the old age of the Duchess of Windsor? With the youth of Tutankhamun? Why the all joy, the tears, the deep, abiding bemusement with the ways of the world?

Just one damn thing after another.

And here we are now. It does turn out to be one damn thing after another, or rather anywhere up to three things per day, which I find is generally my limit.

I knew from the start that I hadn't Thom's incredible eye; that I was fractionally as dedicated as Joe.My.God; that I was one-tenth as trenchant as Peenee; and that I had nothing like the crazed glee of J*O*E or Kevin (then Shirley). I admired Miss Janey's gumption, and Donna Lethal's feral take on beauty. I was interested in local things here is our odd little Sultanate, but hadn't the insider knowledge to be a font of good gossip like Muscat Confidential or Suburban.

So, thought I, what to do? And I decided just to think out loud, more or less, and have fun. If picking around Google looking for amusing pictures can be called creative, I guess I would say this has been the most creative thing I've ever done (believe me, you don't want to read the abandoned novel drafts - they definitely don't count).

From the beginning, I have been amazed by the community that blogs have made possible. Peenee was the very first commentor here, and I count it a brighter day when I get to hear from him, here or over in his corner of the world. I've loved hearing other people's takes on everything from travel to the fashion choices of Bollywood stars; I like knowing that Larry's (careful - his, I believe, is the NSFWest blog that links to this staid place) going to check in, or that I'll get to read what Jason's thinking way down there in New Orleans.

I hope you - whoever you are, known or unknown - are enjoying yourself, because I am.